I'm trying to boot an XP installation cloned into VirtualBox from a real drive. I'm getting the message

whenever* I try to boot the machine.

* This is not strictly true: with AMD-V enabled, the boot process appears to not make it this far and instead hangs at a black screen with cursor.

I created the VirtualBox image from the original drive using the following method:

The original disk (and the image) contain a single NTFS partition with XP installed on it. The owner of the drive indicates that it did boot okay the last time the system made it that far. The (Pentium 4) system has a broken (enormous) heat sink, so at some point it failed to boot because it would quickly overheat and shut down.

If I boot the VM from a live cd, I am able to mount its /dev/sda1 without any problems. I ran ntfsfix and didn't have any luck.

I've read through the instructions on doing this. I didn't really follow them. For example, I didn't run MergeIDE before imaging because the machine was not bootable. However, the symptom of that problem seems to be quite different.

The emitted message is contained in the volume boot record of the XP partition, which leads me to suspect that this is a problem with the core operating system bootstrap procedure, and not related to anything in the registry.

I don't have an XP boot CD.

Check the Storage area of the Settings window of your virtual machine. Your virtual hard drive is likely attached to the SATA Controller as in this example: 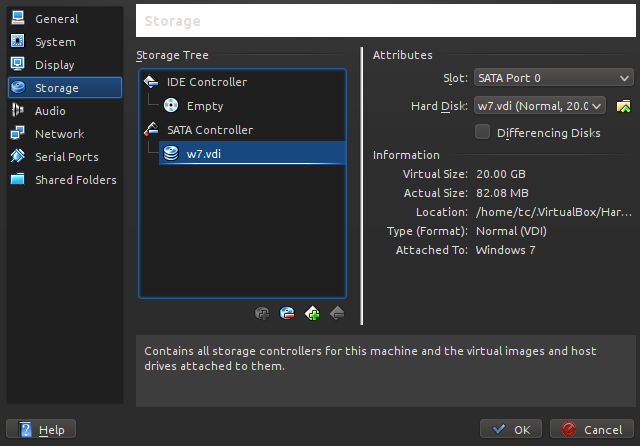 The original system very likely had an IDE hard drive not a SATA drive, which means it will not have any SATA controller drivers installed and won't be properly configured to boot from a SATA attached drive (be it real or virtual). Attaching the virtual hard drive to the IDE controller might allow the system to boot.

If it still doesn't work, you can try the different settings under Type when you click on IDE Controller and see if that helps any.

Not the answer you're looking for? Browse other questions tagged windows-xp virtualbox virtualization clone or ask your own question.

2
Can I (legally) repair a Windows XP install without a copy of Windows XP?

4
How can I migrate a Windows 7 system image into a VirtualBox VM?
5
How to create vdi from existing (off line) partition?
0
Grub cannot find root disk on VirtualBox
0
Alternative way of converting physical disk to virtual
1
Virtualization of Windows under the Linux
1
Boot Windows guest from Linux host in VirtualBox when Windows' bootmanager is on different drive
1
How to restore a dd partition image in a VDI having an empty MBR and a partition