I'm using synergy to share keyboard/mouse between OSX and Win7.

Unfortunately for the mac, the commandkey seems to be bound to the alt key. How do I move it back to the command key? Or the ctrl key?

Change the assignment in the Synergy configuration:

Map a modifier key pressed on the server's keyboard to a different modifier on this client. This option only has an effect on a client screen; it's accepted and ignored on the server screen.

You can map, say, the shift key to shift (the default), ctrl, alt, meta, super or nothing. Normally, you wouldn't remap shift or ctrl. You might, however, have an X11 server with meta bound to the Alt keys. To use this server effectively with a windows client, which doesn't use meta but uses alt extensively, you'll want the windows client to map meta to alt (using meta = alt).

If you don't know how to configure synergy via configuration files and use a Mac as host system, download and install SynergyKM, which provides a GUI-based configuration to Synergy.

Open System Preferences » SynergyKM, select Share my keyboard and mouse, and in the Server Configuration, add a screen for your Windows system and open Screen Options. Change your modifier key configuration there. 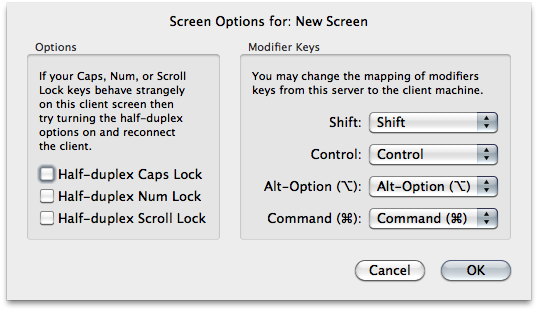 I don't see where you specified which machine is your host.