How to always show titles on Windows 7 Taskbar thumbail preview?

I often use the Win+n shortcuts to 'alt-tab' between windows of pinned application (i.e. Win+2 to basically 'alt-tab' multiple putty windows, where putty is pinned as app #2 on the taskbar).

The Win+n always pops up the thumbnail previews of all the windows, but sometimes it shows window titles above the thumbnail, sometimes it doesn't. Is there any way to always show the titles (i.e. registry setting?)?

For putty sessions this would be especially nice, as the title contains the hostname, and the thumbnail is too small to determine what host that window is for.

I've noticed that the titles usually show up with there are more than ~4-6 windows of that pinned item open - but the number seems to vary - is there a threshold setting for this?

Update: So I just noticed the titles show up whenever the taskbar buttons combine, which varies based on how many windows from other apps are open... AFAIK, the always combine, keep labels setting doesn't exist http://www.windows7taskforce.com/view/2236, but I don't really care about combining, I just want the titles. 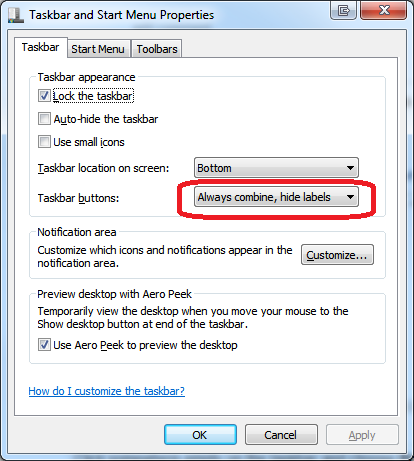 Now when you press WIN + n or mouse over it will show all open windows of that application with their names at the top.

Not the answer you're looking for? Browse other questions tagged windows-7 taskbar windows-registry or ask your own question.

105
Is there any way to hide taskbar labels and not combine taskbar buttons?
16
Windows 7 taskbar groups to use vertical menus only, not thumbnails?
0
Missing taskbar buttons on Taskbar in Windows XP
4
How do I perform multi-window operations on a non-combined group of windows in Windows 7?
5
taskbar icon preview (and Alt+Tab icon preview) disappears quickly
0
Combine taskbar shortcut and window icons
1
Disable scrolling behaviour in Windows 7 taskbar
7
Windows 10 taskbar multiple monitor - Show pinned apps + only active apps on each monitor