Automatically Mute Windows on Shut Down

How can you automatically mute the audio in Windows every time you shut down?

AutoMute - a little portable program designed specifically for this. Automatically mutes on logoff, shutdown, so the next start up is quiet. Also enables a keyboard shortcut for quick quieting down. 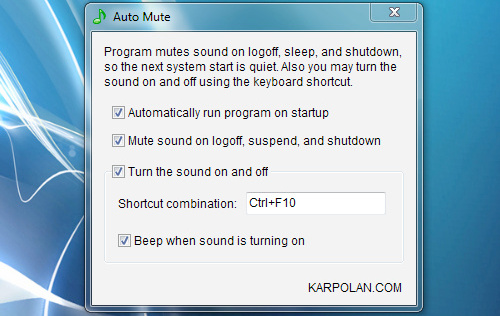 This is a bit of a hack, but here goes:

You can use NirCmd to do some useful things from the command line. One of these is muting the system audio. The command you'll need is:

Put this line in a batch script, then set it up as a shutdown script, so it will run every time you shut down.

To complement lc's answer, I suggest that you create a WSH script, like the one below. Write the following code in Notepad, then save it as a mute.vbs file:

(based on an article found with Google at nilpo.com)

The script turns the volume down to minimum (an alternative would be to mute the sound, with the &hAD code; that however would toggle the "muted" state, so unless you know how to check the "muted" state from the script, you couldn't be sure if the sound is off or on afterwards).

You should be able to register this script for Windows shutdown with the methods linked to by lc in his answer. (Note however, that on Vista Home Premium those are apparently unavailable).

See here for how to do this http://www.microsoft.com/windowsxp/using/accessibility/soundscheme.mspx

This has been answered, and I'm sure the solution works. Still, I'm posting because this possible solution which does not require any third party application. It is a bit drastic in that it shuts down the audio subsystem (driver) completely, not just muting the mixer.

Run a command prompt as administrator, and type the following:

to start the audio subsystem again, type the following:

If you log off or sleep, this will work. A full shutdown/restart resets the audio back on.

The possible downside is some programs might display an error message when trying to play audio while the audio subsystem is disabled. (Winamp shows an annoying message box, while iTunes simply pauses peacefully.)

You could just go into the control panel and remove the startup and shutdown sounds. The exact procedure will vary somewhat by windows version, but on XP look for the "Sounds" tab in the "Sounds and Audio Devices" control panel icon.

Not the answer you're looking for? Browse other questions tagged windows audio or ask your own question.

12
Automatically mute speakers when headphones are unplugged
7
Is it possible to prevent Windows from deleting hibernate file (hiberfil.sys) when shut down?
56
Disable “ding” sound when changing volume on Windows
10
Is there a music player that will automatically mute when other audio starts playing?
3
Volume lowers down automatically on windows 8 when monitor shuts off
19
Mute a program/an application windows 7
0
Firefox opens many processes - cant mute audio
3
Is there a difference between shutting down via Alt+F4 -> Shut down and Start menu -> Shut down?