How many MB/sec can I expect copying to USB 3.0 enclosure with SATA drive?

I am copying my backups from the local hard drive to the new USB 3.0 hard drive/enclosure. It has settled at 26.1 MB/sec.

Is that the speed I should expect, or might something be wrong?

USB3 operates at higher speeds than SATA can handle, so optimally you should notice no difference between USB3 and an internal drive of the same type. In my experience with my own drive, I've noticed this to be true.

As for exact speeds, SATA 2 operates at 3 Gb/s optimally, which gives a maximum bandwidth of ~384MB/s. SATA 1 operates at 1.5 Gb/s I believe. You won't get anywhere near that with a 5200rpm drive though unfortunately. 25-30MB/s doesn't sound overly low to me.

The best test would be to connect the drive internally and test it there. If it's getting the same sort of performance, then see my first paragraph. If not, then there may be other issues coming into play.

EDIT: Using HD Tune I did a benchmark of my own USB3 drive, which is a caddy providing a RAID1 of two SATA2 5900rpm drives. I'd expect these to operate at about 1.5-1.7 times better than the drive you describe, which is what I got as well. The fact these numbers line up would indicate to me that both our results are in fact capped by the drives in use, not the bandwidth provided by USB3. 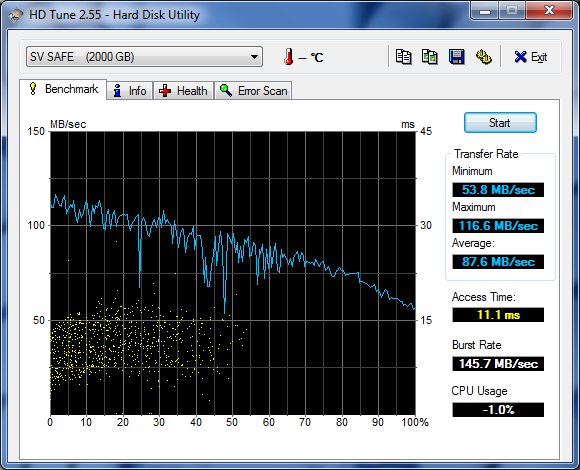 It's very likely something is wrong with your USB connection; the speeds you're seeing are at the mid to high end of USB 2.0.

I'd suggest using USB Device Tree Viewer to determine what type of USB connection is actually being established with the device (ie "High-Speed" or "SuperSpeed").

There's a great description of how use USB Device Tree Viewer in this answer, given to a related question of mine.

To paraphrase, select the device you're concerned with and examine the Connection Information to that appears in the right pane.

I have an external USB 3.0 drive enclosure with a 64GB SSD drive in it. I too get about 25-30MB/s throughput. Sometimes more depending on what is read/written. And it is connected to the USB 3.0 port too.

My USB 2.0 flash drive reads about 5MB/s depending on the data.

I can't find a freeware drive speed tester yet.

While USB 3.0 is about the same rating as SATA2, SATA2 internal drive (conventional) still seems faster.

It would appear that all the drive makers of USB 2.0 and 3.0 outright lie bout the actual real life speeds.

If I got 5GB/s you would hear me scream 1/2 way around the world! LOL

I just got average 88MB/s using a Rosewill USB 3 external enclosure with a ES.2 Barracuda 32MB cache drive. I think its 5600RPM. I achieved that rate transferring "World of Warcraft" directory off of my SSD. I thought it seemed low but after reading this I'm seeing it was a fair speed.

i have a lenovo g680, i bought a new 1tb toshiba external hd with usb 3.0. I get around 48-52 mb/s transfer speed. A usb 3.0 interface can transfer upto 5gb/s but it is mostly limited by internal rives when we copy.

NickNick
11
Add a comment  |
Highly active question. Earn 10 reputation (not counting the association bonus) in order to answer this question. The reputation requirement helps protect this question from spam and non-answer activity.

Not the answer you're looking for? Browse other questions tagged usb-3 or ask your own question.