I have Linux Mint 10 and Windows 7 installed on the same HDD. First partition is Linux, then swap, then the Windows system partition and finally an NTFS partition for commonly used data I would like to share between systems. I work almost exclusively on Linux, sometimes booting to Windows.

I have experienced data loss on the data partition after starting windows several times already. The win installation altogether was broken twice - unable to start and had to be reinstalled. And its not years I am talking about but just a few weeks.

I have set up and used dual boot systems before, but only with Ubuntu, and never had any problems with data corruption.

What might be the problem and what can be done about it? Any additional info I could provide?

The safest thing to do is probably to have the NTFS partitions mounted as read-only and use either a USB memory stick or FAT32 formatted partition to transfer data. This should prevent any corruption occurring.

There is a program called PySDM that can edit the file for you, and apparently you can get it for Linux Mint at this page.

Using the image below as an example, you'll need to look through the partition list until you find the partitions that relate to your Windows install (by checking the mount points). Where you see the options field below, you'll probably have something like user,noexec. You'll want to keep whatever options are already there, but add ro (for readonly) to the list of options (for example: user,ro,noexec).

After a reboot you should hopefully be able to read but not write to your NTFS partitions, and therefore they also should be protected against corruption. As mentioned earlier, a USB memory stick or a partition formatted to FAT32 should be safe for files needed by both systems. Dropbox is also a possibility for keeping files in sync between the systems. 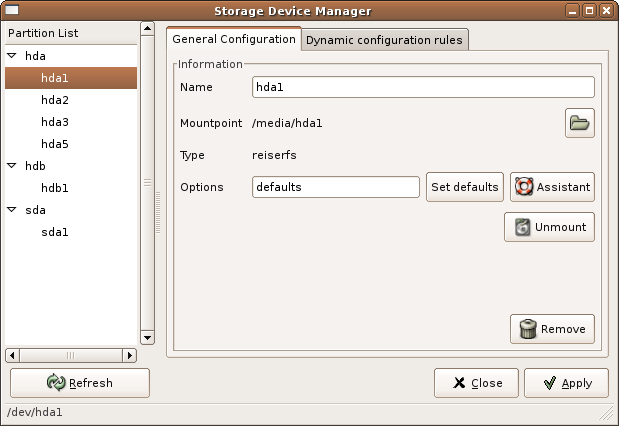 A bit of info on why you might be getting the corruption:

Windows and Linux running on one system is a mixed bag of issues when it comes to working with the same data between both operating systems. Microsoft has no desire, and no real reasons, to provide the open source community with details of the full inner workings of the NTFS filesystem (as of this writing). This tends to mean that Linux implementations of NTFS can be somewhat incomplete or lacking in features, though they do tend to quickly catch up with changes.

With each successive upgrade to Windows, Microsoft has upgraded the filesystem and Linux has been left in a race to try to catch up and support features for people who want to be able to use both systems at once. So, while Linux may be able to safely read and write Windows XP NTFS partitions, it may not be as reliable with Windows 7 NTFS partitions yet (as of this writing). It is also possible for different Linux flavours to have different versions of the NTFS drivers, which could be why Ubuntu was fine, but Mint is not. If you were using Windows XP with Ubuntu, then that could have been why they were happily working together.

I've used Linux in the past, and whenever I've compiled the kernel where the NTFS options are located, I actually had to consciously enable NTFS Write support because it was marked experimental and potentially dangerous (as you have found out).

FAT32 is a filesystem that is mature, well defined, and hasn't changed for many years, so Linux support is very good.

It is entirely possible that after an update in the future, you would be able to read and write NTFS partitions without any fear of this happening, but Microsoft is prone to whimsy and could easily re-break support in future.

Do you have hybrid sleep enabled (see Win7 Power options in control panel)? It seems that NTFS-3G in Mint, if booted when Win7 is in hybrid sleep, can corrupt the NTFS filesystem - however, it's always a bad idea to hibernate Windows then boot Linux, so it's not completely Mint's fault. See this posting

There are also some other reports of NTFS corruption in Mint.

Not the answer you're looking for? Browse other questions tagged windows-7 windows linux multi-boot linux-mint or ask your own question.

175
Why should I use exFAT over NTFS on removable media?