How to prevent programs (e.g. Process Monitor) from killing my SSD in 2 weeks?

I just got my first SSD - Intel 320 Series 120GB yesterday. And I have SSDLife monitoring in the background. I have TRIM enabled.

After I have installed all software, and did some basic testings. SSDLife said "Total Data written, GB" = 52.1 (40GB used space, 70GB free space).

In order to extend the lifespan of SSD, I moved Temp folders, Google Earth cache, Picasa db files to HDD. But I left the pagefile on SSD, because I have only 4GB RAM, I need SSD to speed up IO to the pagefile.

That means, if I keep Process Monitor running in the background for 24 hours (I know I don't have the need to do that, but that could happen if I forgot to close it.), it will decrease the lifespan of my SSD by 850GB.

According to the "Write Endurance Specifications" of Intel's document:

Just found the Pro version of SSDLife has a feature SmartCheck:

check SSD health status on schedule (each 4 hours) on program startup and exit if no changes in health, shows message only if health changes

I think this should somehow detect aforementioned behavior and give warnings.

Process Monitor is one of the most write intensive programs I have ever come across. Worrying about programs like that isn't really worth it because you very seldom, if ever, come across a program like that. Even if you come across another program with writes like that, it is not something you leave running in the background. You only use Process Monitor when you have a specific need for it.

As for the 15TB rating for the Intel drive. 100% 4k random writes to 100% of the drive is about the worst case scenario for an SSD. It is also something you never see on a desktop. That is a enterprise rating. Desktop usage you can probably do upwards of 100TB of writes.

As for finding applications with crazy amount of writes, Process Monitor is a good choice. Just set a filter up to only show writes by a program and you can see what kind of writes it does. I isn't worth doing this with every program, since most do not produce a lot of writes. Only with programs that really do write a lot of data to the drive is it worth investigating.

If you want to monitor the hard disk usage but find that Process Explorer is making too many writes, consider using the built-in Resource Monitor instead. From the task manager's performance tab, click on Resource Monitor. Under the disk tab, you can sort by Writes and see total I/O for each disk in graphs. It's not quite as detailed, but doesn't require a third party program and should be a lot easier on your drive. 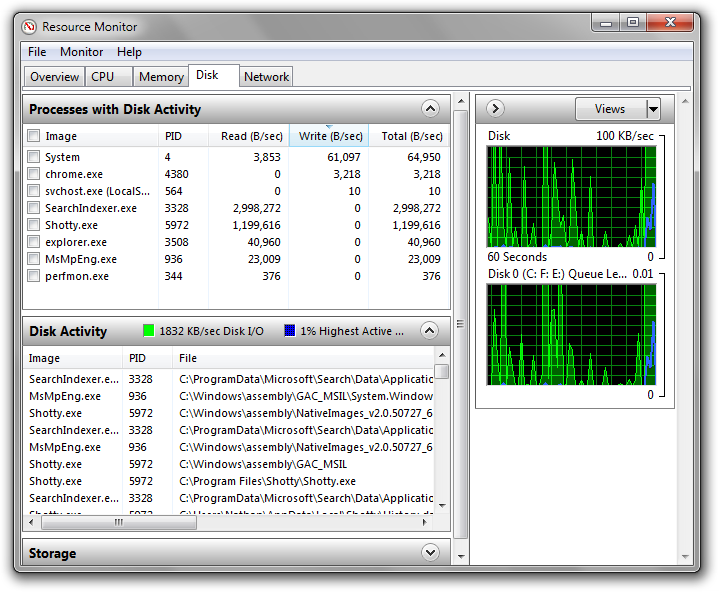 8
Windows 7 setup doesn't recognize my Intel SSD 320 series drive
4
My Intel 320 SSD - is encryption automatic?
3
How do I troubleshoot a slow starting application?
7
Does Having Computer Running Idle Impact Solid-State Drive's Life Expectancy?
15
Should the pagefile be placed on the SSD or the HDD?
2
Hardware-Incompatible SSD?
0
SSD Setup OS/Programs/Documents
1
How to recover data from Intel SSD 320 Series