Mac: How do I remap the context menu key on my keyboard to the command key?

I just got tho TRON gaming keyboard from razer. It's great: super sturdy and stuff.... But there is no command button on the right side... which is an issue for me, being a DVorak user, all of my shortcut keys become two handed.

But there is a context menu button inbetween alt and ctrl.

With KeyCodes from the mac app store, I've discovered that the key Is :

So, I'd like to remap that key to the command key, which looks like this: (right command key)

Karabiner (formerly KeyRemap4Macbook), which contrary to it's name works with all keyboards on any mac, should do the trick. Really designed for these sort of things. Especially PC keyboards. Don't know if it has a predefined rule, but with the info you already have you may define your own.

In karabiner, you need to click "Change Key" then scroll down quite far to "For PC Users" click Application Key to Command_L 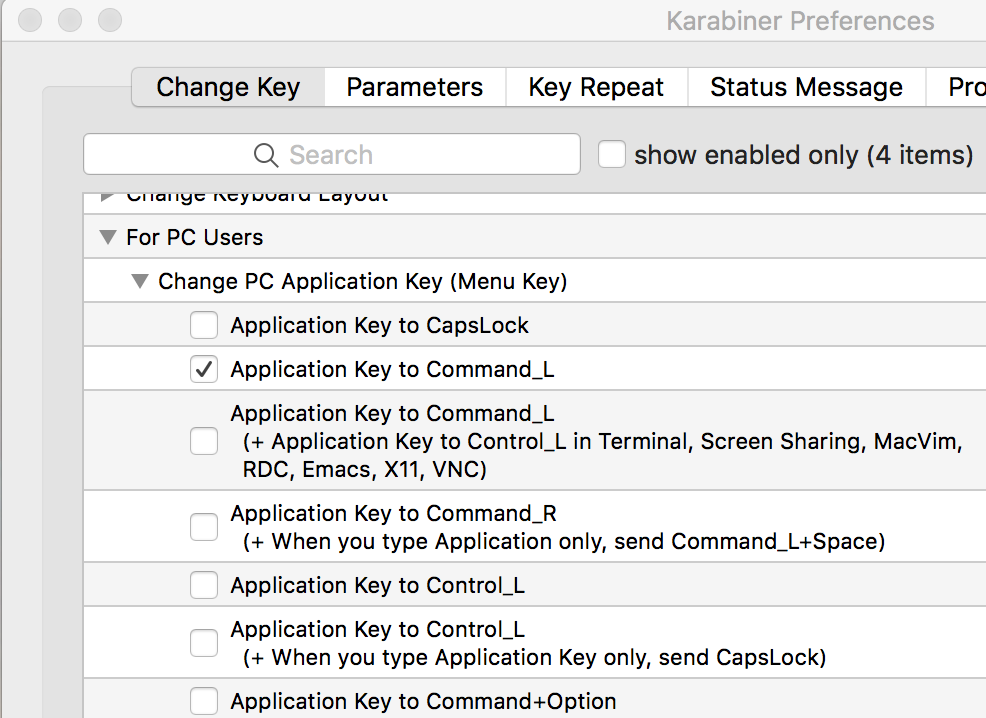 If you are using MacOS Sierra, you will need Karabiner Elements, rather than Karabiner. The window layout is somewhat different.

Not the answer you're looking for? Browse other questions tagged mac keyboard keyboard-layout remapping or ask your own question.

5
Easiest way to type a hyphen on the Mac?

14
How to remap eject key on MacBook keyboard to “delete”?
5
Can I map the Windows context menu key to Option on OSX?
81
How can I remap a keyboard key?
6
Context Menu key on Dell Inspiron 1720 Keyboard
5
Remap pause/break key
1
How to Remap the Raspbian “Wheezy” Keyboard
1
How do I change a keyboard key function?
1
Remap Windows-Key on Apple USB Keyboard