I do know about the existence of alternative shells such as SharpE, Emerge Desktop, Ashton Shell, BB4Win, etc... I've looked into a few of those popular/famous ones, but they all seem to be very desktop-centric. That is, they transform how your desktop, task bar and start menu looks. But what I am really interested in is changing the actual "explorer" part of Explorer in Windows 7. That is, this: 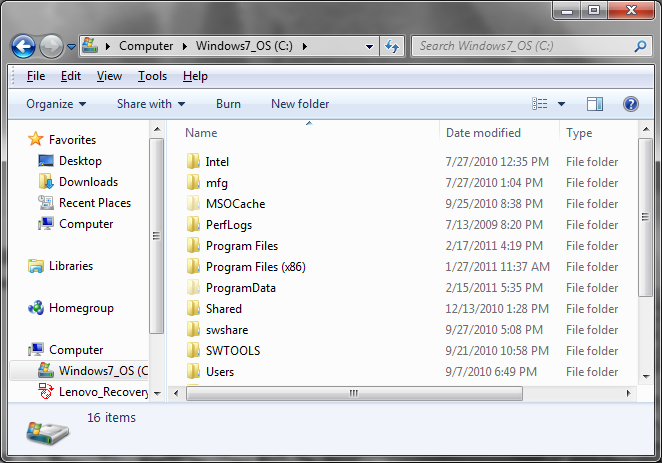 Those shells I named don't seem to do anything about that. (Or did I miss something??) Once I start opening folders, I'll still have to deal with the above-pictured Windows Explorer. Classic Shell is along the lines of what I'm looking for: it adds useful copy/paste, etc. icons, can remove the breadcrumbs, and even changes dialog boxes when overwriting files. That's good but not enough. Does anyone know of more powerful alternatives?

I've been suggested to try things like Total Commander. From what I understand, though, the problem with that is that I would specifically have to open that program in order to use it. That's not the same as shell replacement because if I were to open a folder on my desktop, I would still bring up Windows Explorer. Right? Ideally, I wish to be able to use my computer in the same way as the default way, but so that every time I browse folders and files, some alternative interface is what I deal with. Does anyone know of an alternative shell that provides that, better than Classic Shell does?

EDIT: I forgot to mention, I also get bugged by some small details of dialog box behavior in Windows 7. For example, if I am opening a file, I have to first click inside the file selection window before I can start scrolling using the mouse scroll wheel. It's one extra click but it's annoying. It doesn't make sense! And Windows XP didn't have this issue. Would any alternative shell also "fix" that??

You want an alternative file manager, also known as an Explorer replacement. Some of them will take over folder open operations, so that double clicking folders opens the file manager. e.g. Directory Opus and xplorer2 are two I know of that do this, there are probably others.

However, shell dialogs in programs (Open/Save) will still be driven by Explorer. It's really more accurate to say that Explorer is a relatively thin veneer over the shell's file management abilities. It also provides the Desktop and Taskbar, but the file management abilities mostly come from other components in the system. Explorer doesn't provide them to the rest of the system.

That's why they're so difficult to override; to heavily modify those components requires messing about very deep in Windows with ramifications for every non-trivial application. Especially since those DLLs get loaded into the memory space of those processes, screwing up a mod potentially destabilizes almost every user-facing application.

Try Explorer++, light and fast, does not install anything unless you configure it to.

you can install TeraCopy to replace the file copy/move functions.

Not the answer you're looking for? Browse other questions tagged shell or ask your own question.

11
How would I replace default Windows Explorer with an alternative one, say Q-Dir?
4
Enhanced Explorer for Windows XP?
2
Which Windows Explorer replacements have this feature: takes over folder open operations?

35
Stop Windows 7 Explorer from automatically expanding folders
5
Bash shell: how to reconcile portable configuration files and GUI terminal start-up types (login or interactive)?
0
Need some help figuring out BB4Win or any of its varieties: does it replace windows explorer?
4
Kids-friendly Windows shell replacement
0
Emacs always starts shell in home directory with Windows 7
8
How to launch the Windows Explorer shell after starting with a different one?
0
How can I keep Classic Shell start menu in Windows 8.1 for every reboot?
1
Create tmux session in seperate shells
0
Custom folder added under this pc not auto selected by explorer