Bad sound quality of 3.5mm headphone with mic on laptop

I have a set of headphones that have a built-in mic for hands-free calling. They work great on my Sony Ericsson Cedar cellphone.

The problem is that when I connect headphone to my Dell N5010 laptop to listen to music, the quality is horrible, with very weak or no vocals.

When I hold down the talk button on the mic, however, it changes: the quality goes up. When I let go, it goes back to sounding bad. When I adjust the jack by pulling it out and moving it around, the quality goes back up, but I have to hold the jack in place.

I've looked for a way to configure the sound card but found nothing.

Is there a solution besides gluing down the talk button on the mic?

Read on for a bit of explanation...

I'm afraid you won't be able to fix the problem by software. There are two types of jacks: 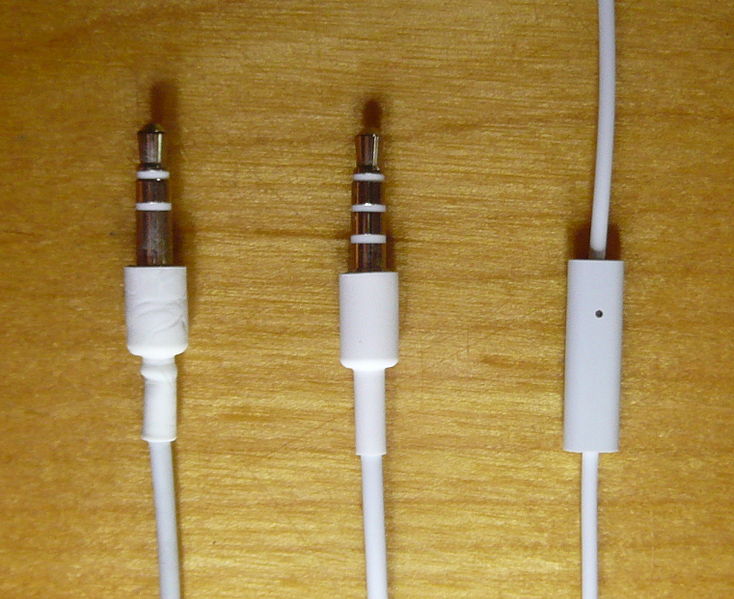 The thing is: Your phone will fit the jack. Your laptop however probably won't – it could be that one of the stereo rings doesn't match the laptop's output jack perfectly. The laptop will only have two internal connectors (for stereo), whereas the jack has three. The stereo ones will have to overlap exactly. This is why you have to pull out the jack a little in order to get it working. In the image you can see that this is a matter of millimeters.

Pressing the talk button may short-circuit something so that you achieve the same effect as pulling the jack out.

On a 3 pin TRS connector it should not make any difference, since the last 2 will be shorted to gnd, however where there will be a difference is when you are using the Apple to Standard, the ground will be lifted and connected through the mic, so the vocals (normally) will be muted/distant.

Here is what I did: Remove the last insulating ring with a blade or cutters the one away from the tip of the head phone jack. You can see the one I mean in the pic above in the other post.

Now use a small file to file down the excess and round it off (I used the file from the nail clippers).

Not the answer you're looking for? Browse other questions tagged audio headphones microphone 3.5mm or ask your own question.

6
Distortion on human voices but not music
0
Low quality tinny sound from my headphones when using them with my laptop
9
Music but no voices on headphones
9
My headphones are not playing voices, but only the music
1
Sound volume in headphones is too low

4
3.5mm Headphone and Mic --> 3.5mm Headphone and 3.5mm Mic
5
Why can't I use my internal microphone at the same time as my headphones?
1
I always hear my in-line mic, even if the mic is disabled
0
I want to connect my iMac audio port to both a set of headphones with a mic and a set of external speakers
2
Stereo output muted while using microphone on wireless headphones
1
Windows 10 does not connect to Sony WH-1000XM3 microphone
5
JBL headphones have miserable sound quality with bluetooth on laptop, deactivation of mic (the supposed fix) is not possible
4
Headphones do not work when unplugged and plugged back in