My laptop, which recently has been experiencing RAM related problems, is now also having LCD issues. The screen get a vertical rainbow pattern randomly in Windows and sometimes when booting: 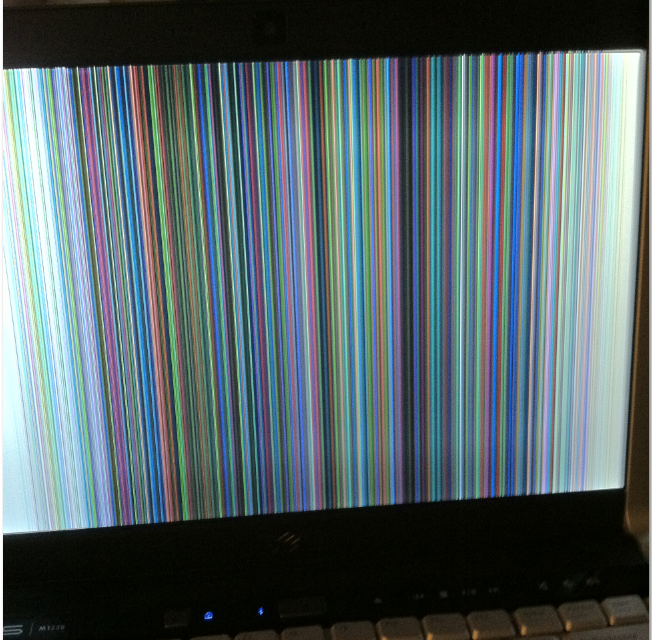 Is there a quick, cheap fix for the LCD problem? Given the memory issue and now this, perhaps it's time to recycle this 5 year old laptop.

Don't give up just yet. This is probably caused by a bad connection between the display and the graphics adapter. RAM probably has nothing to do with the issue. I suggest you take the laptop apart and make sure the display connector is properly attached.

Also, if you connect to an external display you might have a picture even when the laptop display goes all rainbowy.

Before you write off the system, consider powering down the laptop, removing the power connector and battery and removing the RAM (it's probably under a flap on the bottom), and then reseating it to see if the problem is related to poor contact or dust/contamination in the connector. Be aware that the RAM can be damaged by static electricity so ground/earth yourself by briefly touching a grounded metal pipe or ground point before starting work and avoid touching the contacts on the memory module/s.

By the way, RAM usually will not affect the screen. If you are having problems (such as bad connection) with the RAM, more often than not it will just shutdown the whole computer or prevent it from booting. I don't think the RAM has anything to do with it.

I had this happen with a clients laptop Dell Latitude D620. I noticed the lcd panel right side mount was "wiggly" and discovered a screw was missing. I hypothesized a cable going to the lcd was getting pinched.

I connected an external monitor to it, and pressed the blue function key and F8 numerous times to see if a video signal would appear on the remote monitor. Eventually it did, but it looked even worse than your image. I pressed Alt + F4 to try to exit out of windows (assuming it was at the xp login screen, and the screen image changed to horizontol gray and black blocks, and I could see garbled text at the bottom of the screen, counting up from 50. I let it finish counting to 100 and the system rebooted and the lcd screen on the laptop (not external) came back and showed bios booting (never saw bios before).

I tightened the screws best I could (1 was still missing) and told the client to buy a new laptop, he didn't need the screen dying on him in the middle of a presentation, and I would use this sketchy laptop as leg warmer on cold nights during raid rebuilds :)

Had exact issue.. plugged into external display works fine. On lappy screen it's also ok once into windows.. replaced lvds cable from mobo to lcd panel and all fixed.

I know on a horizontal black screen at the bottom half of the screen, pushing the lower left side of the screen fixed it. I also have read it could be the graphics driver. Just reinstall the display driver and it might fix it.

Not the answer you're looking for? Browse other questions tagged lcd laptop or ask your own question.

0
BSOD on my laptop - strange video aftifacts, is it the RAM?
2
LCD screen inverter failure symptoms
0
Hard Drive buzzes and laptop fails to boot
1
Laptop lcd freezes and fades white sometimes (or short horizontal lines on black background), does this indicate a problem with the LVDS cable?
0
What would cause an LCD panel to get both slightly dim and slightly blurry?
1
Asus laptop shuts off randomly