Is there a name for the close, minimize and restore buttons?

It seems to me that there should be a generic name for the close, restore, and minimize buttons on the title bar in window managers. It's been getting hard to search for answers associated with them. I am also a developer, and I'll be working with low-level window manager stuff on Linux, so this would be a good thing to know.

Is there some kind of generic term for this?

Title Bar Buttons is the best term that I've come up with, but this is in no way official. If it's different for each window manager, then that would also be good to know. I couldn't find much searching around...

It would be nice to know the terms used by all platforms: Windows, Mac OS, GNOME, KDE, XFCE, etc.

Apple calls them Title Bar Buttons. Note that they're named Close, Minimize and Zoom. These are also the names assigned in the AppleScript accessibility API:

It seems Microsoft does not give them a name (anymore?), as they're always listed like the following:

The glossary also does not contain a common term for these buttons.

Going all the way back to the Windows 95 evaluators guide, it simply calls these the Window Buttons. 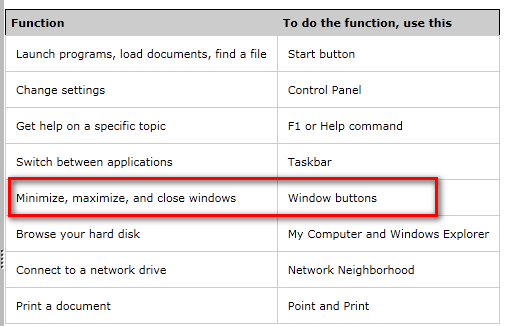 "Window state buttons", although that covers more than just those 3.

Windows Forms refers to the group of them as the ControlBox internally.

Not the answer you're looking for? Browse other questions tagged window-manager title-bar or ask your own question.

2
What is the menu on the upper right corner called in Windows?

2
Generic X balloon apps?
0
Seek for perfect window manager
3
Is there a WinSplit Revolution style window manager for Ubuntu Unity (11.10)?
1
Show window titles in window switcher in Ubuntu
1
GNOME 2 + Compiz equivalent?
0
How do I set my window manager in Fedora 20 without using a graphical login prompt?