I have an i7 with 2 physical cores, because of hyper threading Windows 7 reports 4 cores (at least in the Task Manager). My question is, when allocating cores to a VM in VMWare Player is it taking from the pool of 4 hyper threaded cores or simply 2 physical cores?

Strangely it allows me to select up to 8 cores despite only having 2 physical and 4 total with hyper threading on the host.

Edit: Here is what the VMWare Player docs say:

With Virtual Symmetric Multiprocessing (SMP), you can assign up to eight processors to a virtual machine on any host machine that has at least two logical processors.

The following are all considered to have two or more logical processors:

NOTE: On hyperthreaded uniprocessor hosts, performance of virtual machines with Virtual SMP might be below normal. With VMware Player you can power on and run multiple dual-processor virtual machines concurrently.

In response to your second question:

There is an option when you create the VM and also after you have created it, in the settings panel under Processors in which you specify whether you want to use both processors, or the cores per processor.

This proves that it does indeed take from a pool of the total cores available that includes hyper threaded cores because when I selected 8-cores it gave a warning, but when I selected 4-cores it did not.

The answer: Hyper threaded cores are included in the available cores to be given to the VM. 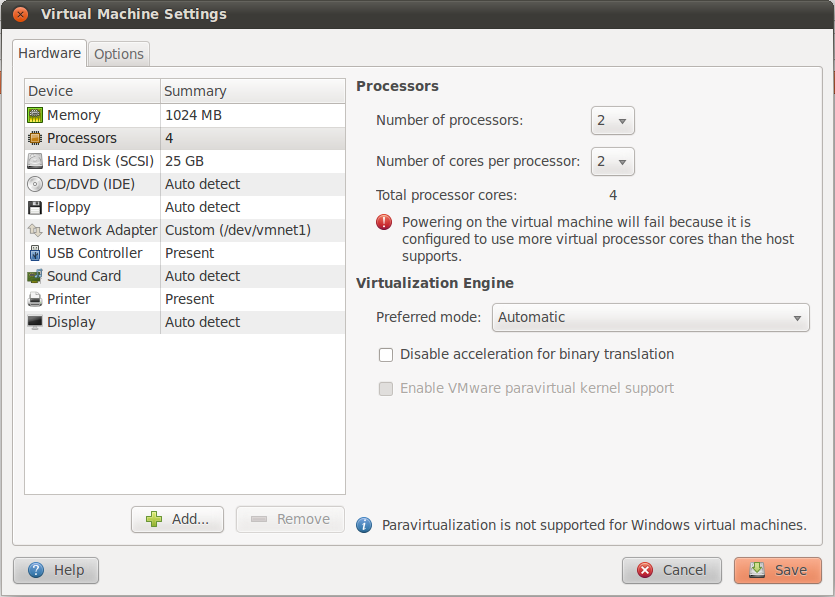 In my case, I don't have the ability to use that many cores or processors, but with your CPU, you should be able to do so.

Not the answer you're looking for? Browse other questions tagged virtualization vmware-player hyper-threading or ask your own question.

0
# of Cores in VMWare shows more cores than possible

0
Duplication of Architecture State means physically extra?
10
Quad Core host with hyper-threading, how many processors to configure in VirtualBox?
1
Why is the processor limit in VMware player lower than the number of physical cores on my CPU?
9
Why Hyper-Threading provides 2 virtual cores but not more?
1
Physical vs logical vs virtual cores
0
How to set 6 physical, 6 hyper threading total 12 cores to hyper-v virtual machine - A parameter cannot be found HwThreadCountPerCore
1
Number of processors in a multi-core CPU with hyper-threading