Firefox asks to be default browser every time it loads

Every time I load Firefox up, it asks to be the default browser and even though I say yes it happens the next time I start Firefox. It also does the same if I tell it not to ask me. How can I fix this?

You may want to look at "Setting Firefox as the default browser does not work".

Check to see if Windows is setting your defaults: 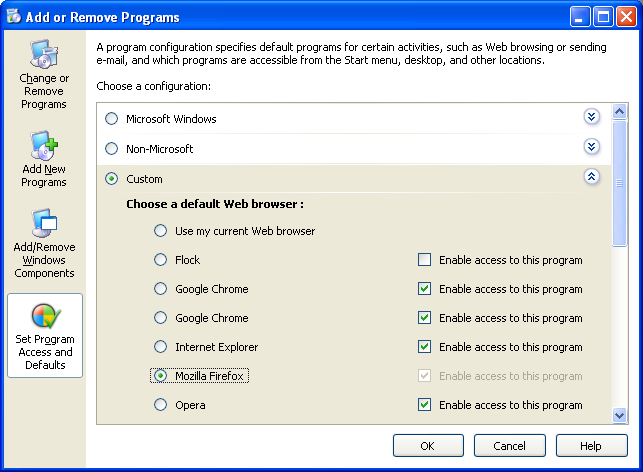 related: How to change the default browser in Yahoo! Messenger

My Windows Firefox has the following sequence to stop checking for that.

However, if choose not to be asked when prompted, it should save that.

It could be possible that some other tool (AV? Anti-Spyware?) is preventing the change of default browser on your system.

Or, you do not have permissions to write this change (less likely but possible).

Click start then run and type "http://www.google.com" or another address and see what browser opens up.

If it is firefox, I am confused about this problem and if I was you, go in to tools > options and find the option to stop the check on system startup.

If it is another browser, see if you have installed any sort of anti spyware that prevents the default browser from being changed.

Try running Firefox as administrator and see if that helps.

Right click the icon, then select run as administrator.

This is what solved the problem for me

None of the first provided advice in Google resolved the mentioned issue on my computer, but I found the solution.

The incorrect behavior obviously caused by migration from 32bit to 64bit version. We need just to replace the incorrect paths to the Firefox main executable image in the Windows registry:

2) Place focus on the root of registry database (My Computer);

4) Enter the next text to the search pattern field: "C:\ Program Files (x86)\Mozilla Firefox\firefox.exe" and press Search button to find first occurrence, all the next occurrences could be found by pressing consequentially F3 key.

3
How to change the default browser in Yahoo! Messenger