My keyboard has no "media" keys; can I control media without them?

My USB keyboard does not have "media" keys -- that is, dedicated keys for play, stop, next, prev, volume up/down, etcetera.

For the sake of this question, I would prefer not to install additional software if I can avoid it.

Is it possible to issue some standard key sequence on a generic USB keyboard that emulates these play, stop, etc. multimedia keys?

I'm pretty sure it's not possible to do what you want. Media keys don't send key combinations; instead, they have their own usage IDs in the HID. See this document (media keys are in the Consumer Page (0X0C)). If you want to simulate them using a key combo, you're going to have to do it in software.

AutoHotkey (AHK) is a free, open-source macro-creation and automation software for Windows that allows users to automate repetitive tasks. It is driven by a scripting language that was initially aimed at providing keyboard shortcuts, otherwise known as hotkeys, that over time evolved into a full-fledged scripting language.

To learn about AHK I recommend checking its site, pages mentioned in Quick Reference and especially skimming at least AutoHotkey Beginner Tutorial. Don't forget to download, install and fiddle with it yourself. There is also helpful forum.

In this case you should look particularly at following pages: Hotkeys (Mouse, Joystick and Keyboard Shortcuts), List of Keys, Mouse Buttons, and Joystick Controls and Send / SendRaw / SendInput / SendPlay / SendEvent: Send Keys & Clicks. Then you'll be able to assemble simple AHK script, e.g. something like:

You create .ahk file, paste above code in it (w/o useless MsgBox, of course), save and double click to run it. You'll get H icon in systray allowing you to interact w/ the script, particularly: suspend hotkeys, pause script (not useful here) or just exit it. For better convenience I suggest compiling such script. You can do it using Right Button Mouse on the file and choosing Compile Script. Then you'll get .exe file (pretty big, but it's like complete autohotkey) that you can share w/ others or add to autostart for instance.

In AutoHotkey's Remapping Keys and Buttons page you can read about other way of assigning keys to keys, remapping. It may be not useful in your case (unless you're ready to "lose" some keys), but it's still worth reading. (Then you should figure out why I haven't used AHK remapping in my example.)

Let me quote it (w/o blockquote to preserve formatting) and fix some links along the way:

How to Apply Changes to the Registry

There are at least two methods to remap keys via the registry:

EventGhost is an advanced, easy to use and extensible automation tool for MS Windows. It can use different input devices like infrared or wireless remote controls to trigger macros, that on their part control a computer and its attached hardware. So it can be used to control a Media-PC with a normal consumer remote. But its possible uses go much beyond this.

Haven't tried it, but looks interesting and a bit related, so I think it's worth mentioning it here.

Some SuperUsers may remember Girder, that unfortunately stopped being freeware long time ago. EventGhost seems somewhat similar. I no longer have AverMedia's TVPhone98, but using remote via Girder was fun.

Another option (for laptops) is to setup your trackpad finger gestures in Windows 10.

This is how i set mine up since I don't have media keys. 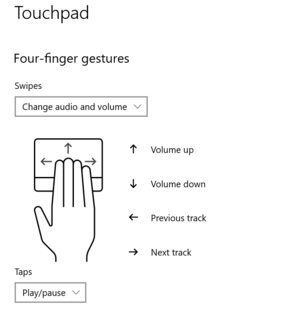 Although this isn't exactly what was asked for, this solution is great since you don't need any extra software. Some might find it more convenient than a keyboard shortcut.

If you have some useless keys, (like scroll lock, or pause, or the key to invoke the contextual menu, or the windows key at the right side, or else) you can remap it to media keys.

I don't blame you for not wanting to install extra software, but AutoHotKey is a program which lets you write scrips for key presses.

AutoHotkey is a free, open-source utility for Windows. With it, you can:

Windows Powertoys Keyboard Manager allows you to define such shortcuts.

My keyboard does have Pause/Play, decrease and increase volume and mute. But it's missing previous and next track, so I've created the following shortcuts:

As others have said, AutoHotkey can help in this case greatly. For example, this script will remap Previous/Next buttons to Winkey + < / >, Volume Down/Up to Winkey+ [ / ] and Mute Toggle to Winkey+ \ . For Play/Pause, Space bar works anyway by default in YouTube by default and in desktop players like MPC-HC / MPC-BE / VLC. Just for Windows Media Player, you can remap Ctrl+P (default for Play-Pause) to Space.

Now your keyboard has multimedia keys :)

Many media player applications have support for "Global Hotkeys" -- key combinations that allow you to play/pause, go to next track, etc. from anywhere on your computer. (Many of the Ctrl / Alt / Shift / Option combinations have already been claimed by other software, but the Win / Super / Meta key combinations are relatively open.)

For example, I'm running Songbird and I've mapped Win+NumPad0 to play/pause, while Win+NumPad4 and Win+NumPad6 are previous track and next track respectively.

Check to see whether your preferred media player natively supports global hotkeys (and if it doesn't, get a better one).

This isn't a complete answer to your question since it is likely too specific but it may contain some useful information so I am passing it along:

I do it like this using fluxbox and ogg123 - I have this in .fluxbox/keys

Windows 10 has quite robust Speech Recognition. Set it up and activate it, then use these commands to control media:

To find out what commands you can use in an open window, you can hover over the buttons with your mouse, and check the tooltips. If there's no tooltip, you can say show numbers, and a matrix of numbers will overlay over any actionable elements on your screen.

Take a look at https://github.com/dlrudie/Snip

In case anybody still struggle with this, Microsoft PowerToys provides a powerful tool for this. You can map any keyboard combinations to control Media (Play/Pause, Volumn up/down/mute). I mapped Ctrl+Alt+Home for Play/Pause, Ctrl+Alt+Up/Down for volumn Up/Down and very comfortable with it. Hope it helps

On Windows 8, you can find "Keyboard" in the Control Panel. From there, open up the Microsoft Mouse and Keyboard Center. Under Keyboard, Basic settings, there's a list of special keys. Click on one of them, click on "View all commands". Below there, "Media commands" includes "Next Track", "Previous Track" and "Play/pause" among others.

Works well for me with Windows' own Music app.

I have a Microsoft keyboard, so I don't know if the Microsoft Mouse and Keyboard Center works the same with other keyboards.

I think WMP Keys might be a solution, but it only works with Windows Media Player.

WMP Keys What is it?

I found one app which can do almost all of them in windows 7 and it works without any issues when your desktop is unlocked. Also it is pretty easy to use.

Only drawback I found is it will not work when desktop is locked say I come back from sleep and the computer is locked and I have loud music playing. Multimedia keyboards can mute from there itself. But with this app you need to unlock first.

Cmd + Ctrl + Shift + F24 - shortcut for play/pause which I found with pynput module for python3.

1
Assign different multimedia functions (like a notebook setup) to F1-F12 keys on desktop computers?
9
Is it possible to add volume controls & shortcut keys to a mechanical keyboard which does not have the keys?
5
Is it possible to change my computer's volume with my mouse?
1
Are Multimedia keyboards able to control Xbox Music on Windows 8?

5
Assign custom keys to keyboard media buttons
1
disable 'play' key on media keyboard opening files in windows media player
4
On a Mac, how do I use the 'special' keyboard keys on a non-Apple keyboard?
56
Italian keyboard: entering tilde (~) and backtick (`) characters without changing keyboard layout
1
Media Keys on Windows 7 Lock Screen
1
How can you assign a batch file to a special key on a keyboard?