I am a long time user of GIMP. It works beautifully on Windows XP and Windows 2000.

The time has come to move on... to Windows 7. So I installed GIMP 2.6.11 on Windows 7 64-bit (straightforwardly taking all defaults), then tried to open a .png file.

But unlike in GIMP on Windows XP, instead of the image, I was greeted by the following message:

Now... I know that GIMP is perfectly capable of handling PNG files, so either GIMP for Windows is not compatible (yet) with Windows 7 64-bit or I failed to do something additional that is required with this version.

If so, what is the trick to make it work?

Update 1: I followed the 1st advice from @Ganesh R. below (running installer in XP SP2 compatibility mode) but it didn't help. This time, however, I noticed that a component named GIMP Python extension cannot be selected (see snapshot below). Could that be related? 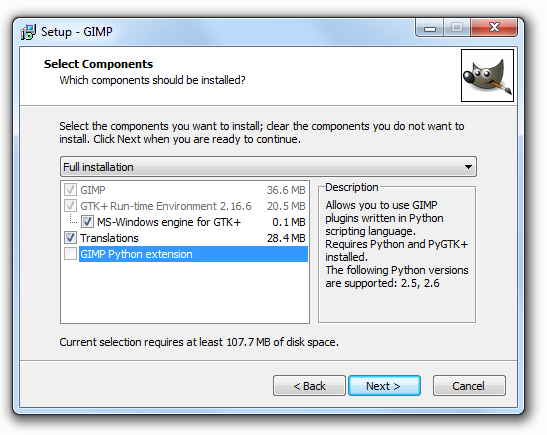 Which suggests that the GIMP Python extension component has nothing to do with this.

Version 2.4.7 is good enough as an interim solution. It would be nice if version 2.6.x becomes available for Widows 7.

A quick google shows that may people have faced the same issue.

The official site just says Windows XP SP2 and above. This indrectly means that it is not supported on Windows 7.

If this too fails to solve the issue, just download Windows XP Mode, install XP Mode, and use GIMP in the Windows XP VM.

Beta version 2.6.7 works well on Windows7 64-bit with no need for compatibility mode. I haven't found any showstopping bugs but then I don't use it heavily. It can be found here

Not the answer you're looking for? Browse other questions tagged windows-7 64-bit gimp or ask your own question.

2
How to install GIMP on Windows 7

0
How do I stop iTunes complaining about compatibility mode in Windows 7 even when it is already switched off?
2
Error updating BIOS on a Dell Inspiron 1501
3
PNG files and GIMP
14
Huh? JDK not found? (on Windows 7 64-bit)
37
Why does GIMP start up so slow on my machine?
20
Export layer to png file in gimp
1
Linux install old version of gimp
1
Microsoft Camera Codec Pack not working in Windows 7
5
GIMP save PNG in 16 and 24 bit