Moving a LVM/LUKS encrypted partition to the end of a harddrive?

I need to move a LUKS encrypted partition to the end of a harddrive to expand another partition.
Does anyone know how to do this?

Is it possible to do this with other partition editing programs? 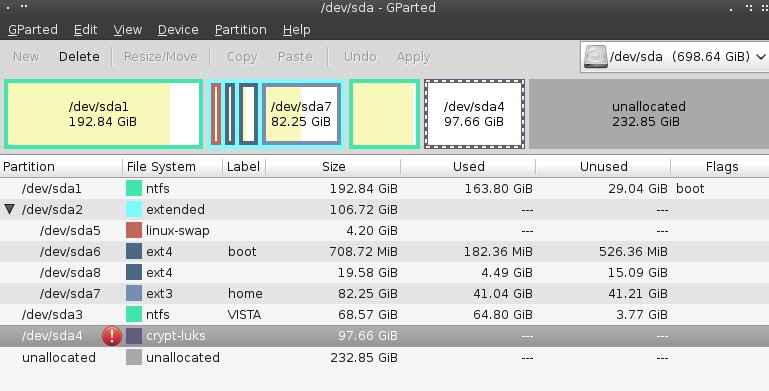 EDIT:
I wrote up a quick tutorial on how I fixed this: http://matthiaslee.com/moving-a-luks-encrypted-lvm-with-dd-and-sfdisk/

So the only way is to calculate the beginning and ending of sda4 by hand, delete it, create it new at the end of the disk and move the content into the newly created. But this is a quite risky operation and you should create a full disk image of your hard disk first. In order to create the disk image boot a rescue CD like Knoppix and do something like this

All other steps should also be done with a rescue CD.

After the backup check the geometry of your hard disk with sfdisk -luS. The output will give you the start and end of each partition. This is an example of my disk:

Partition 5 for example starts at sector 3919923 and contains 15631182 sectors. Each sector has 512 bytes. You have to write down the start sector and size of your partition. Be sure to write it down in a way you can read it later. ;-)

After that you can erase sda4 and create a new sda4 at the end of the disk having the same size.

Now you can move the contents of the old sda4 to the new sda4 by the following command:

You have to insert the sizes you have written down.