How to automatically make my PC sleep and wake up?

I have a laptop back home with Windows Vista installed.

I have tried a lot, but making a .bat file which makes it fall asleep needs to be manually activated. How can I do it automatically?

For Statup, there should be a setting in the BIOS, but without more details can't really help.

Check if there is an support in the bios for automatic wake up/shut down.

Try Task Scheduler, built into the OS. It can, appropriately, schedule tasks to run at specific times, in response to events, and give you a decent amount of control over when these tasks repeat.

You can tell it to run just about anything, so batch files can be your friend: Though for waking up scheduled tasks won't do, as it can't run. You may be able to use wake-on-LAN, or your BIOS may be able to wake your PC at a specific time.

There's an entire SU question regarding shutting down/sleeping the computer from the command-line, so I won't bother repeating that info here again:

How can I put the computer to sleep from Command Prompt/Run menu?

For waking the computer:

Unlike what @Phoshi seems to suggest in his answer (from 2011), with Vista+ you can use Task Scheduler to wake up the computer from sleep.

Look under the Conditions Tab for your task: 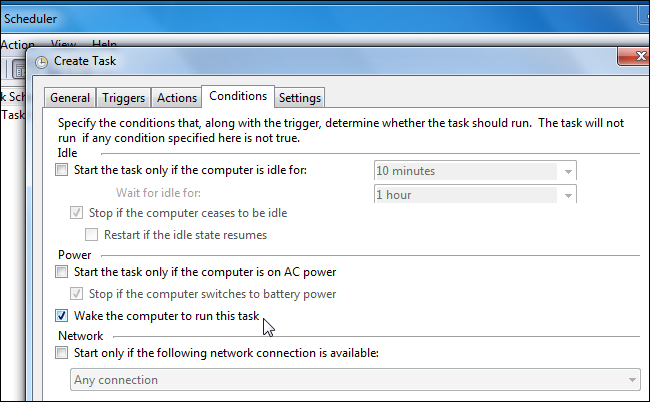 Basically create a task, set the time you want to wake the computer, and then set it to run a program, with the "Wake the computer to run this task" enabled. For example, running cmd.exe with /c exit as the arguments will cause the CMD to be launched, and then exit is immediately run to close the CMD window.

More info: How to Make Your PC Wake From Sleep Automatically

Not the answer you're looking for? Browse other questions tagged windows windows-vista automation sleep batch-file or ask your own question.

1
How to start and shutdown computer at a given time
159
How can I put the computer to sleep from Command Prompt/Run menu?

39
Why won't my computer go to sleep automatically?
0
How can I put a computer to sleep without login
0
Windows Vista Laptop won't sleep automatically
5
How do wake timers work?
3
How can I use a .bat file to make the computer sleep again whenever it wakes up unexpectedly?
2
Schedule Windows 10 Sleep and Wake
0
Windows 10 Update and sleep
1
Laptop goes to sleep then into a coma. Won't wake up by keyboard/mouse