Too much memory getting used

I have been feeling this way for a while, looking at task manager mentally ballparking how much physical memory should be in use, and noticing a large disparity. I finally got around to measuring it. Taking the results of tasklist and adding, gave about 3.87 GB. Task manager told me I was using 4.6 GB of memory. This seems like a large disparity. Where did it go?

EDIT: So its clear, it is not going to prefetch. It has also been suggested that its part of the OS, but not part of any of the system processes. If this is true, please find a way to get the OS to tell me how much memory is getting used. Since I want to find out where the memory went, asking me to look at the difference does nothing for me.

EDIT 2: It is not the following:

Picture of resources taken up. Not quite sure what it will do but... 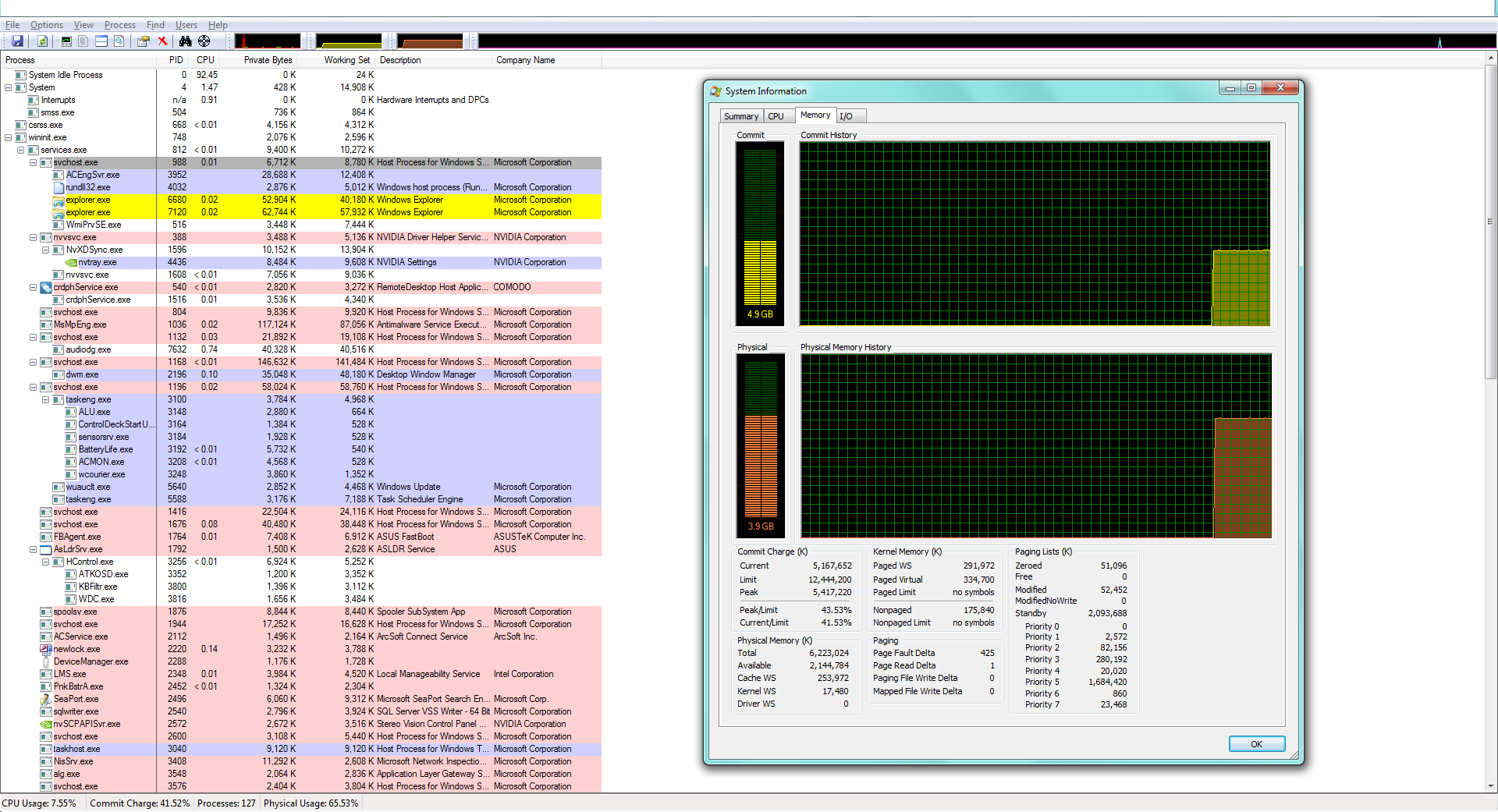 I suggest downloading the Sysinternals Suite from Microsoft. It includes several utilities that will give you more information than Task Manager does. Take a look at the Process Explorer, RAMMap, VMMap, and Process Monitor utilities. To get the most information from them, you may need to do some configuration to change what info is displayed.

Also, since you're interested in Windows memory, here is a series of blog posts from Mark Russinovich, one of the Sysinternals developer/founder. It will help make sense of the info the utilities provide.

Windows 7 uses 'unused' memory to precache things to make things run faster. Should you need this memory, it'll get freed up.

After you’ve used a Windows Vista system a while, you’ll see a low number for the Free Physical Memory counter on Task Manager’s Performance page. That’s because SuperFetch and standard Windows caching make use of all available physical memory to cache disk data. For example, when you first boot, if you immediately run Task Manager you should notice the Free Memory value decreasing as Cached Memory number rises. Or, if you run a memory-hungry program and then exit it (any of the freeware “RAM optimizers” that allocate large amounts of memory and then release the memory will work), or just copy a very large file, the Free number will rise and the Physical Memory Usage graph will drop as the system reclaims the deallocated memory. Over time, however, SuperFetch repopulates the cache with the data that was forced out of memory, so the Cached number will rise and the Free number will decline.

The numbers you see are totally imprecise and should only be taken as indications.

An operating system is an extremely complex entity and a simple-minded program like Task Manager can never total the entire usage, many parts of it are simply inaccessible in User mode under which it runs. Some of the elements that are inaccessible to it, or are simply impossible to attribute to any "task", are the hardware segmentation tables, shared-memory allocations, kernel-allocated memory, page-memory allocations, device-memory and many more.

You will find more explanations in How do I interpret the Performance tab of Task Manager?, but I choose to quote this part :

What do you expect from a program calling itself the "Task Manager" anyway? There is nothing called a "task" in the operating system kernel - the OS has "processes" and "threads". DOS had "tasks". The Intel hardware has "task" structures, but the OS doesn't use them because it's faster for it to do it itself.

The Task Manager is a very old Windows program, has problems even attributing functions to services, and the numbers it shows should be taken with a large pinch of salt. It is probably missing out on large areas of memory that it cannot manage to count or attribute to any "task".

As you may have noticed, Task Manager can give you a simplified snapshot of how most applications are affecting your system, but leaves a lot to be desired. If you really want to dig into caches in RAM etc. you need to get into Performance Monitor. It will take some work for you to build your set of system counters to monitor your system.

You can get there by running compmgmt.msc or a windows search for "computer management" and on the left-hand side, you will see a performance tree that you can expand and dig into.

Here is a reference for some of the tools available: http://technet.microsoft.com/en-us/library/cc749249.aspx

The memory is probably being used for the kernel. Using Process Explorer we can see a much more detailed breakdown of system memory: 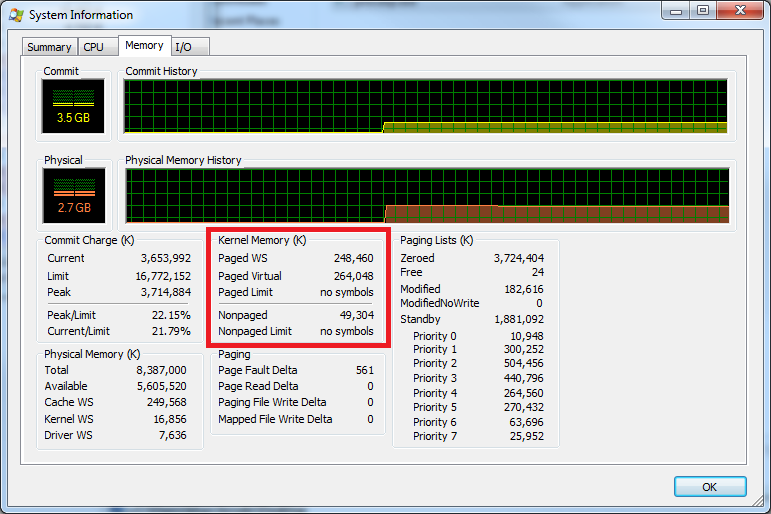 Here I've highlighted the amount of memory in use by the kernel, which is Paged WS + Nonpaged, or roughly ~300MB of memory. This is on a freshly started system with just webbrowser and a few other applications open, though under heavy load my home system easily breaks 500MB or even 700MB of kernel memory.

@soandos, did you take into account how much memory the video is pulling? It is very possible that the video is pulling .73 GB of RAM. Do you have a decent video card on this machine? If not, it will use RAM like this (as of what I know). If I am wrong, someone please chime in here, but I believe that this could be the effect of the video pulling from the RAM.

The difference I think you're seeing is not because the tools not being able to see the used memory, rather it's because of different forms of measurement. I can't explain this very well but fortunately I don't have to, Mark Russinovich of Sysinternals fame has written a very good series of posts regarding process performance in Windows. The parts about physical memory and virtual memory should explain what you're seeing.

I think I solved it!

I just came across a tip about RAMMap and it turned out it's µTorrent!

Not utorrent.exe itself, but files shared by µTorrent – at least in my case: one of the files was using over 600 MB, and another over 200 MB, etc.

Some memory is used as cache. As soon as you need this memory, it is automatically released. So, no need to worry.

Not the answer you're looking for? Browse other questions tagged windows-7 64-bit memory or ask your own question.

0
Win10 50% of memory being used on nothing
77
Windows using too much RAM, how to diagnose resource hog
2
Is it normal that my computer uses 1.10G of memory?
5
Windows 7 memory usage

0
Why is my Windows 7 using so much memory?
0
Where is the used memory in Task Manager & Resource Monitor coming from?
11
Why does my page table take up so much memory?
10
How do I know how much swap is used on Windows 7?
0
A lot of bash.exe processes in Rammap taking up memory
1
Commited memory keeps going up