I use utorrent for downloading using remote desktop.

Can i set it to download in secure mode or is it not supported? (I mean hide my data on network) Is there any torrent downloader that does?

As others have already noted, HTTPS has nothing to do with torrents.

But in uTorrent you can enable encryption for outgoing connections, and optionally accept only encrypted incoming connections from others. Just download latest uTorrent version, go to Preferences > BitTorrent and in Protocol Enctiption select appropriate settings:

You have to decide for yourself what is more important. It's a trade off between speed and security. Personally for me 'enabled' with 'legacy connections' allowed is quite enough to satisfy my level of paranoia :]

HTTPS is an encrypted HTTP connection.

This is kind of like asking whether a car can have added vitamins.

You better use encrypted tunnel on your PC before starting torrent clients or browsing, this way all your traffic will be encrypted and secured. There are good services that provide all in one solutions to be protected in web, torrenting, unblock Skype etc. They are listed here : http://blog.pirateray.com/post/35136605543/pirateray-and-vpn-review

You can find encryption information under the 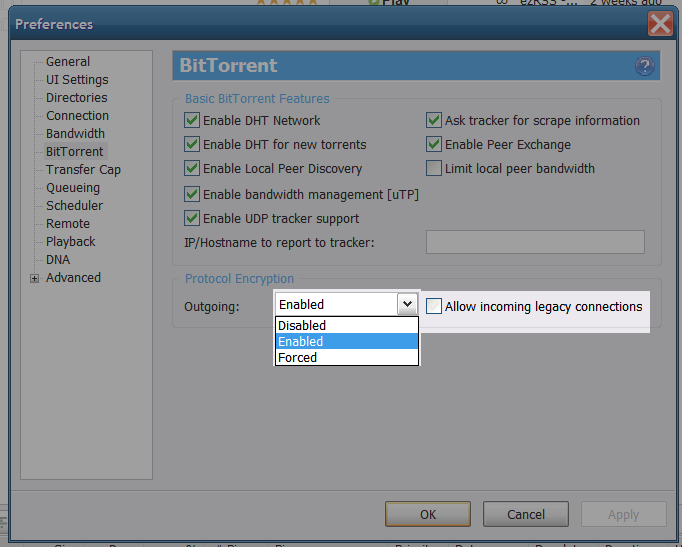 µTorrent supports BitTorrent encryption, it can be enabled in settings. (I don't know exactly where though.)

Not the answer you're looking for? Browse other questions tagged download connection encryption utorrent or ask your own question.

1
Failure: This torrent is not registered with this tracker
7
High “wasted” on a torrent download, with no hashfails
3
Is it possible to tell if a file is valid after an incomplete torrent download?
1
Using Linux how to resume a torrent download started on Windows?
5
Detecting if ISPs are blocking torrent download
0
How to synchronize (i.e.Seed and Download) torrent without internet?