GParted errors on MBR Disk, Claims it's GPT. (It's mistaken, but why?)

It's very tempting for me to go on a rant here about GParted and Linux, but I'll do my best to avoid it. :)

Why does GParted claim that my disk is corrupted and GPT, whereas the Disk Utility thinks everything is fine?

My only partition on the disk (NTFS) has Windows 7 x64 on it, and has absolutely no problems -- I never had any problems with it, and I ran CheckDisk to make sure.

Why is GParted behaving this way?

(I was going to post this on AskUbuntu, but since GParted isn't really limited to Ubuntu, I posted it here. I'm using Ubuntu 11.04 x64's boot disc.) 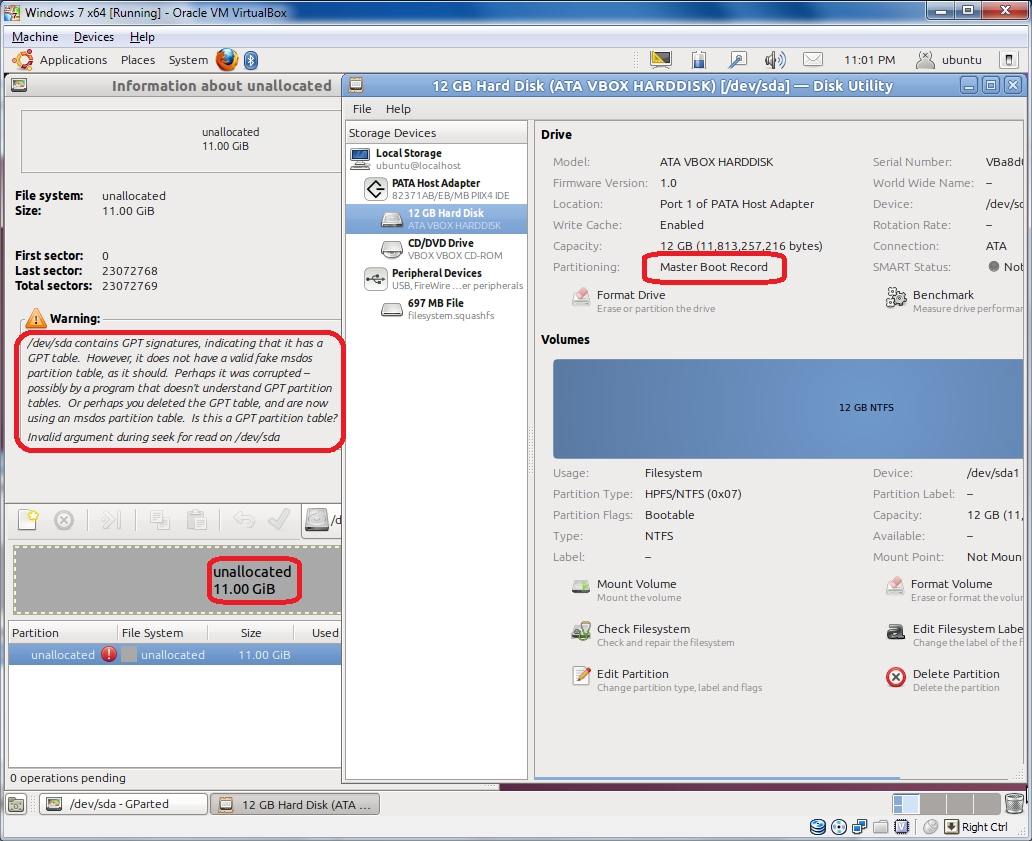 Chances are the disk used to be a GUID Partition Table (GPT) disk. Such disks have partitioning data from sectors 0-33 (typically) and also in the last 33 sectors of the disk. If a GPT disk is repartitioned by a GPT-unaware utility, that utility is likely to replace just sector 0 (the MBR), leaving most of the GPT data intact. Technically, the disk is then an MBR disk; however, some partitioning tools, including many Linux tools that are based on libparted (including GParted) become confused by this. They may show the disk as being completely blank or show the old GPT partitions rather than the new MBR partitions. This is a bug in libparted, but it's triggered by some inconsistent data on the disk.

The solution is to wipe the old GPT data. This can be done various ways, but the simplest is probably to use FixParts, which is designed for this and some other partition table repair tasks. Alternatively, you could use dd to wipe sector 1 (numbered from 0) and the final sector on the disk; that's where the GPT signatures that are confusing libparted reside.

Sorry I didn't get here sooner, Mehrdad. My guess is that when you rewrote the partition table you also wiped out the boot loader in the MBR. Re-installing your boot loader should fix that problem. It's possible that you wrote the wrong partition table, though, which would be harder to fix.

There is a nice post here, " Today, 99% of PC uses a table partition standard named "DOS partition table". As you can guess, it's quite old, and was designed when OS used 10Mbytes hard drive. So a new standard was defined by Intel long time ago (but not as old as DOS!) which is better. This partition table is read bu BIOS at boot, so for backward compatibility, the GPT start with a fake DOS partition table to make old BIOS understanding it's not a real DOS partition table. The installer can't continue because it understand nothing on what is your disk, and can make serious damage to existing data. This GPT standard is used on Apple computers and from few times on some professional PCs. Is this disk coming from a Mac or was it formated for a Mac ? You can boot on Ubuntu CD, choose "Try", then System->Administration->Gparted Partition Editor, then erase current partition table (which will erase all data) and recreate a new DOS partition table. After installer should work. " which is really straightforward to solve.

Not the answer you're looking for? Browse other questions tagged hard-drive mbr gparted gpt filesystem-corruption or ask your own question.

2
Getting rid of a GPT signature without touching MBR

7
2TB external drive, disk initialization: MBR or GPT
5
Convert a GPT disk to MBR from XP
18
Using GParted to convert GPT to MBR without access to an OS
3
Convert GPT disk to MBR disk in-place?
1
Convert disk with OS from GPT to MBR
1
gparted persistently claims that GPT table is corrupt
3
How to stop Windows misplacing secondary GPT during booting?
1
I have a disk that Linux sees with a perfectly fine GPT with one NTFS partition, but Win10 says the entire disk is uninitialized