Looking for a graph program for time series

I want to find software (Windows or Linux) that can create time based graphs with the following wishes. Can you suggest which programs come closest to my wishes? 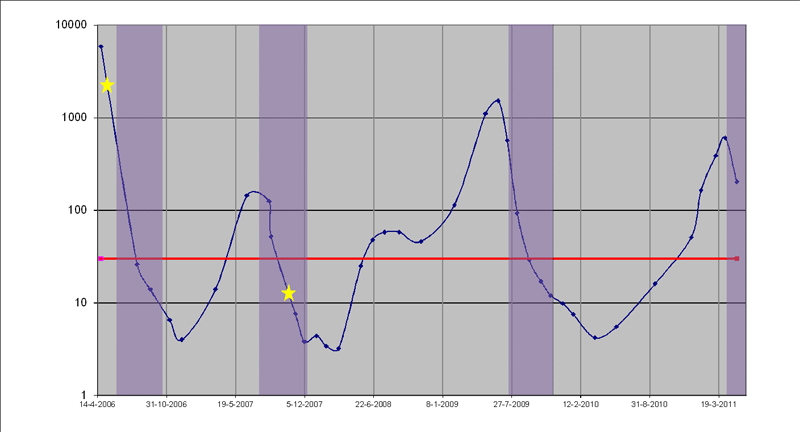 I think you might want to take a look at the following two:

Gnuplot is a portable command-line driven graphing utility for linux, OS/2, MS Windows, OSX, VMS, and many other platforms

It's probably the number one graphing tool for scientific data (at least where I come from). Here's a list of demos. You sometimes have to prepare the data for it in a rather awkward way, but it's very widely used.

R is a free software environment for statistical computing and graphics. It compiles and runs on a wide variety of UNIX platforms, Windows and MacOS

This is the one I prefer for graphing, as it plays nicely with data of any kind, although it can be used for much more than that. There are some graphics here.

Both of them have those features:

It does however take some time to get used to either of them and you'd definitely need to read the documentation, but your wishes are all fulfilled.

The nice thing is that you can have the application not only output images in a GUI, but you can also script them to update output automatically to a folder.

Not the answer you're looking for? Browse other questions tagged software-rec charts time gnuplot or ask your own question.

2
Excel automatic axis scale completely inappropriate for data
1
Creating a even time axis in Excel when you have a uneven time values
0
Excel Chart, Formatting Line with Stack Column Chart
0
How can I make a Stacked Column graph of this data in Excel?
2
Add "Events" to a Time-Series Line Graph (Vertical line or x-y scatter)
1
How can I draw a graph like this in a computer program?
1
How to combine time interval data on excel