Play audio over network with Windows 7?

I have seen software for Linux systems that allows me to send the audio from one system to another over the network, is there such a software (a driver likely) for Windows, specificly XP but Vista and Windows 7 would be best.

I'd like to stream audio (ALL audio, not just mp3s, etc) from my laptop to another computer over the network. I know that Windows Remote Desktop can play audio over the network pretty easily. Is this part of .Net that I could just code a simple app that streams the audio without RD'ing in? I also don't want to run it over an extra physical wire if possible.

Airfoil will let you stream audio from Windows/Mac to Windows/Mac/Airport.

Send any audio from your PC to AirPort Express units, Apple TVs, iPhones and iPods Touch, and even other PCs and Macs, all in sync! 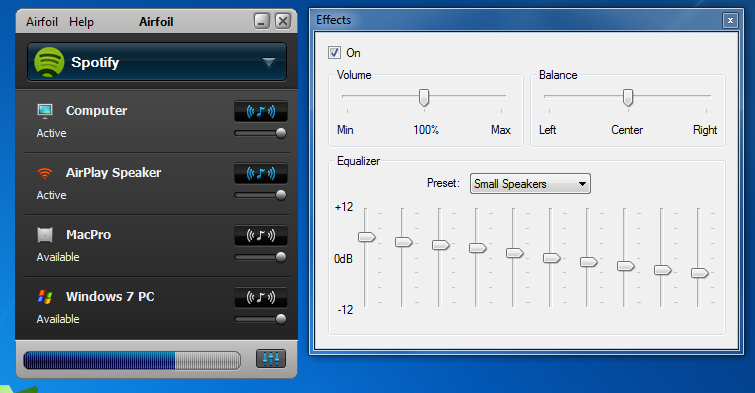 I don't know for sure... but here are some thoughts. The difficulty in sending your laptop's audio over lan is that windows does not provide natively a 'channel' or something to listen on that a software developer could use to implement something. In essence, I believe a successful solution has to be either:

From what I understand, this seems like a complicated fare: Try making a fake driver that will support a plethora of inputs (mp3s, surround games and movies, various bitrates and sample rates, simultaneous applications), while also taking care of encoding, transmitting with low latency, receiving on the other end, that works well and is stable with various version of windows, all that with a damn low profit incentive given only a minority of people would be interested to buy it. Sounds like a bad business plan to me.

Have you tried pulseaudio on windows? Apparently it is cross-platform.

A few years ago, Creative Labs had a pretty good 'what you hear' channel that applications could record on. I remember playing audio over sound card hardware effect such as reverb and recording it in realtime in my audio software using this "what you hear" channel. Technically, Shoutcast will be able to select this channel as the input and stream all your laptop sound. I don't have a Creative card anymore, so I don't know how well this works nowadays. Plus, I imagine you want to use your laptop's built-in audio, which likely would not have that feature, but an external Creative Audigy might!

More expensive and complicated than you current best bet: a physical audio cable to your main computer....

Plug the output of your laptop back into your laptop's linein with a mini <1 ft cable. Without a doubt, shoutcast can stream your sound card's line-in. The downside with this method is reduced audio quality with 2 superfluous DAC/ADC.

This answer is a little late but I figured I'd post it in case someone is looking for a solution in the future. There is a piece of software called Airfoil that has this exact functionality. It also lets you stream to PCs, MACs, Linux, iPhones, iPod Touches, Apple TV, and more.

I'd take a look at the "Play To" feature that is present in Windows 7. The little I've played with it, it was performed awesomely. Here's a little write-up with more info.

VLC can be run as a server (on your laptop) and a client (on your HTPC) to stream video or audio. Just use the Media menu (helpfully placed where File menu is in most apps) and select Streaming, then select all the files you want to stream, click Stream and you'll get options of how to stream it.

When it's started, start up VLC on the HTPC and direct it to the laptop's IP and port and it should play.

You htpc likely has a line-in jack on the audio card. Just run an audio patch cable there from your source computer's speaker jack.

That cable is only 6ft, but you get longer ones or combine it with an extension cable.

Try https://github.com/duncanthrax/scream for a simple VirtualAudio driver. This might not be as good as Airfoil, but has very low lag time, hence usable for videos (VLC with timing adjustment). Using this between 2 Windows PCs using an Ethernet cable gave ~500ms lag, so not for gaming.

I tried Airfoil and while it does have a lot of features, the amount of lag (~3 seconds on direct Ethernet) when sending audio from Airfoil to Airfoil Satellite (Windows) is too high to make it useful for anything other than music(sound only).

Here's a solution that worked for me from Ubuntu to Windows 10 without trouble:

For this you need to download ffplay included in ffmpeg.

The latency is several seconds right now though so will not work for many use cases. Might be fixable with some tweaking.

Not the answer you're looking for? Browse other questions tagged windows-7 windows drivers audio or ask your own question.

3
Share audio between computers over network (like Mouse without Borders)
1
How can I broadcast the Line-In from my sound card over LAN?
0
Share the sound of my PC and play it on onther PC in the same network?
0
Stream any audio (NOT FILES) from my PC to WDTV Live?