Why does the ping command in my batch file execute in a loop?

I created a .BAT file in Windows 7 that has the following line:

I want to avoid writing ping command through the command prompt, which is why I created the batch file. I don't know why the ping command is being continuously called when the same statement is put in a batch file.

It is a bit unclear what is exactly the problem you face since you don't provide any output or screenshot of what you don't like, but I'll explain the two most likely problems I see:

Given your script is called ping.bat and looks like this:

then the interpreter (cmd.exe) searches/probes the paths in the environment variable %PATH% for something that looks like ping ... and it does that by appending each suffix from %PATHEXT% which contains something like .COM;.EXE;.BAT;.CMD;.VBS;.VBE;.JS;.JSE;.WSF;.WSH;.MSC. so, calling just ping from the ping.batleads to a search for ping.com ping.exe ping.bat and so on. The interpreter will find a ping.bat in the current working directory (your ping.bat) and calls it.

The interpreter of the batch file will usually repeat the commands you have written to the .bat/.cmd file. Thus something like this ping www.superuser.com will look like this:

I had the same problem,

Maybe remove the -t parameter and then tell your batch script to wait for you to press enter before killing the cmd screen.

Haven't used windows in a while but this should work:

I had the same issues. Here is the resolution:

And ensure it contains:

This will allow you to ping one or multiple addresses and will show the results on screen. This batch file can be run from anywhere on your PC by double clicking on it.

The local script execution seems to prevent ping.exe from running in a script. Try right-clicking, and "run as administrator". I'm looking up how to update the execution policy.

Just when I thought I knew something about Windows, they changed it.

Update: Recursion is the answer...

e.g, when I run ping.bat, then run it again as pingx.bat: 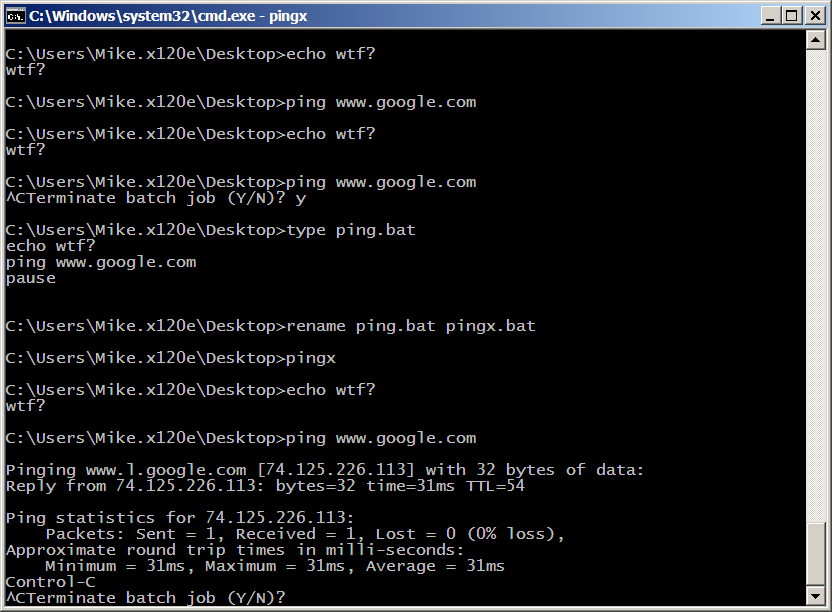 It is because you name the batch file same as the ping command is named. Rename your batch file to something else. Etc.: myping.bat

In other words, do not name your batch file (ping). Use any other file name you want. And the following code will work perfectly.

Not the answer you're looking for? Browse other questions tagged windows-7 batch-file ping or ask your own question.

1
Batch File, PING, errorlevel and > null what do they do?