How can I find out processes are using swap space?

I have a linux server top reports about 9GB of swap used: 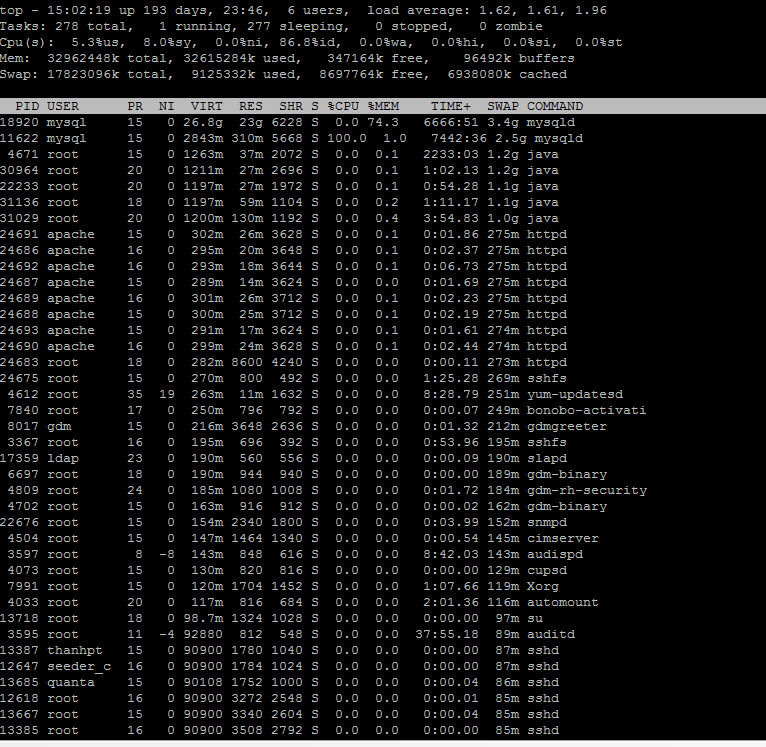 But I cannot figure where's it use swap, some google results said that top - O commad follow by p will show swap usage by process. But as shown in the above image, taking a brief sum of the SWAP column shows that > 10GB of swap is used, so where does the 9GB figure for swap usage come from?

Top reports that about 96492kb of ram is used by buffers. Is there anything I can do to utilize this, instead of using swap?

It is possible that multiple programs will be using the same swap area, so it will be reported twice.

There is no need to try to tell Linux to use the buffered area instead of swap--it's already very smart about what it's doing. If you're using 9gb of swap and 9gb of buffer, that's a good thing... that means Linux realizes that 9gb of stuff loaded into memory isn't being used actively, so it's more efficient to swap it to disk so that your buffer can grow larger, and improve your performance.

EDIT: If you add up all of the memory used by each process, you'll get much more than your physical RAM, too. This is due to shared libraries being used by multiple programs, as well as the way Linux handles forks--it doesn't duplicate the entire program in memory, it only duplicates the portions that differ between the two instances. In some cases, video memory can be shown as part of an X process--I think the old Voodoo3 cards did this. There may be other cases where "phantom" memory can show up in top, as well.

As a bash script:

Output could be sorted Hi-Lo by piping to sort:

Of course, rewrite this in your favorite language-of-the-week as you desire. My Awk-fu is not strong.

Not the answer you're looking for? Browse other questions tagged linux memory swap or ask your own question.

5
How does top calculate the memory figures on Linux?
0
How to find which programs are using up swap space
2
Determine which programs are using swap / how much
1
How can I know for sure that buying more memory for my MacBook Pro will result in perceivable increase in performance?
64
How to disable Mac OS X from using swap when there still is “Inactive” memory?
137
Linux: find out what process is using all the RAM?
1
On Centos 6.3, why do several swap measuring methods return different results?
0
Conflicting information about memory usage on Debian 7
12
Does it matter about the amount of the swap area in Linux system
6
Linux hangs when it runs on out of memory