How does touchpad in laptop detect a tap?

I just wonder, how does the touchpad detect your tap? Does it detect by pressure?

I am using synaptics touchpad in a lenovo notebook, but I think manufacturer doesn't matter.

Basically there are two types of touchpads (same technology is used for touchscreens too).

Here's a picrure of how that works on a touchscreen, but on touchpads, the result is same: 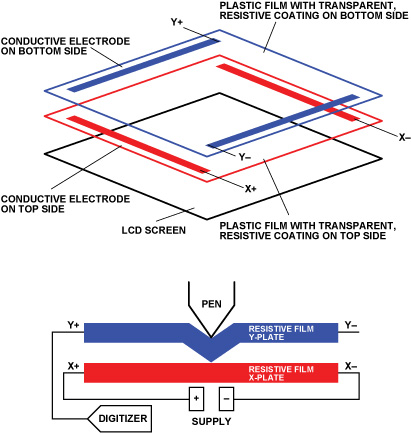 When the touchpad is pressed, two films contact each-other and based on the location of their contact, coordinates can be calculated. Also if pressure calculation is needed, resistance of the wires is measured and in that way, exact pressure can be determined. With higher pressure, contact between the plates is better and resistance is lower.

This type of touch sensors will work with any pressure source sufficient to bent the film and make contact between the plates. As far as I know, this type of technology is no longer in use for laptop touchpads.

The second type of touchpads (and touchscreens) is capacitive.

There are two popular types of this type of touchpad.

First uses a matrix of wires which looks same as the one in resistive touchpads, but is not flexible. To explain how it works, we need a bit of theory on electric field.

Here we have electric field between two charged plates:

Situation is similar with the case where we have wires. When a piece of material which will have considerable impact on the electric field is brought in the field of the capacitor formed at the location where the two layers intersect, it will affect the capacitance of the capacitor. This change can be detected an measured. The closer the finger is to the node, bigger effect will be and so you can get pressure measurements too.

The second type of sensor is used on both touchpads, touchscreens and as "flat" buttons now commonly seen on various devices. 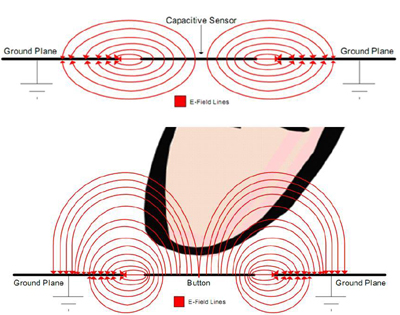 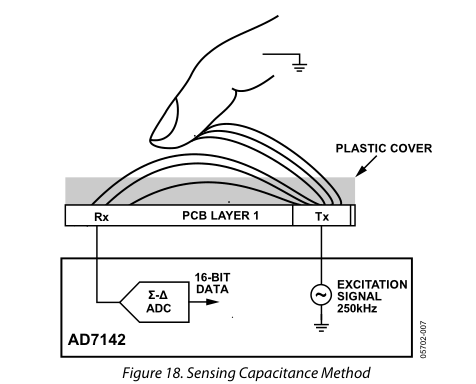 It has instead of two layers of parallel wires a grid of small pads where one is transmitter and the other is receiver. They form capacitors and when finger or other material which affects electric field is brought near, the capacitance will change. This change can be detected and measured and this way location of the finger (o other material which affects the electric field) can be detected.

The capacitive sensors are supposed to have higher reliability than resistive sensors (no moving parts), have higher precision and not be affected by various objects other than a finger which may be placed on them.

There are two common technologies that enable touchpads to work: capacitance and conductance.

Capacitance is the most common method and enables the touchpad to hold an electrical charge. It creates two arrays, one vertical and one horizontal, and when your finger touches a spot on the touchpad, it locates the coordinates of that location. Think of it like a map. You enter two coordinates (one latitude, one longitude) that will lock down a location. The pad sensors then convert the location from the touchpad to the location on the screen.

Conductance is a less common technology and enables the touchpad to have two surfaces with small insulators in between them. When you touch the top surface it connects to the bottom surface, and the location of pressure is determined by sensors and translates the location in a similar way as with capacitance.

5
Disable "gesture" to turn off touchpad
1
Accidentally (?) disabled touchpad scrolling
9
How do I enable "Momentum" (aka "Inertia") on a notebook with an Elan touchpad?
2
How to move cursor while clicking the touchpad?
2
Disable two-finger click for right click, but keep two-finger tap
2
synaptics touchpad in linux can single tap twice to drag, but not double tap twice
0
Lenovo Ideapad S145-15API Precision Touchpad Driver
1
Enable right click with two finger tap?