Is there a way to determine if my PC is killing my monitors that doesn't involve killing another monitor?

Is there a way to test to see if a PC is killing monitors somehow?

I have a power supply tester that I can use, but no other components have had problems. Would a multimeter be of use or a danger? Are two dead LCD monitors bad luck, statistically significant, or both?

FYI: The PC and monitor are plugged into the same power strip. I have an outlet tester, but I need to dig it out of my junk box. I'll update this post with the results of the test when I get them.

Update I tested the outlets in the surge strip and the wall socket with my outlet tester, and everything appears to be wired properly. No swapped wires or poorly grounded outlets.

(Hopefully) final update The new monitor has been in place for a few weeks now with no issues. If it's gonna die, hopefully it'll go before the warranty ends. Thanks for the reassurance!

About 2 months ago, my wife yelled, "Honey! My computer isn't working!" When I investigated, it turns out that the LCD monitor was dead. It had power, but would not display anything on the screen. I swapped displays with another PC to verify that the monitor was dead. My monitor worked on her PC, but her monitor showed nothing on mine. At the time it seemed like no big deal, it was 7 years old and had survived 2 moves. It had served us well.

I replaced her dead monitor with the monitor from my PC and bought a new (bigger, sexier) monitor for mine. Now, her PC appears to have claimed a second display. This time it won't even power on. Maybe the second display was also on it last legs and the move pushed it towards the light, but I don't want to buy another display if it's just going to get fried.

This is probably just random bad luck. This is more likely if both monitors are about the same age, and made by the same manufacturer. Also, the monitors failed in different ways.

Once upon a time, I lost a monitor with a loud pop. I sent it off to be repaired. When it returned, I plugged it into the same computer and electrical outlet. "POW" again!

I checked the outlet with a tester and it showed bad. Since this was a commercial style 4-foot plugmold power strip (without any other circuitry such as surge protectors) and all the other outlets on it were OK, curiosity got the better of me and I opened the strip. Inside, even though the outlets were all oriented the same way, the hot and neutral lines were swapped for that one outlet (and "unswapped" for all the other outlets on each side of it).

This is what the interior of one looks like when viewed from the back of outlets. You can see how simple they are inside and can probably imagine how straightforward the manufacturing process is. Like me, you probably find it difficult to imagine how the mis-wiring occurred, especially considering the one I was using had heavier gauge, more rigid wiring than this apparently home-use model seems to have. 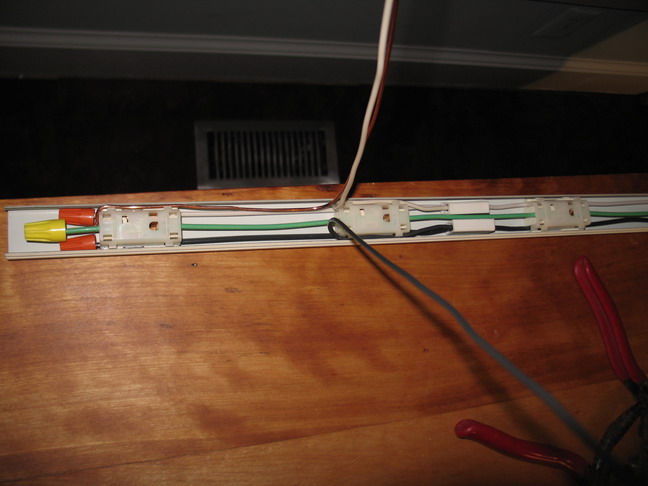 It's unlikely to be the computer that's causing the dead monitors. The highest output from a vga port is 5 volts on pin 9. The pins for the red, blue and green data should be around 0.7 volts. If the computer was pushing more power through the port than this it probably would have instantly fried the monitor instead of working for another day/week/month.

to kill a display just put the "refresh frequency" to a higher value (this work on CRT ones) i dont know for LCD. But now, (windows or the graphic card driver, i don't know) put a limit on that setting, maybe on old monitors they not, so maybe that value has somehow changed.

I would seem to be unlikely that the PC has "claimed" the second monitor if it won't power on, I think it's just coincidence, but I understand your concern. Were both monitors of a similar age?

If you're feeling really paranoid test the extension socket (I assume that's what you mean by power strip). It could be that one or more of the outputs on that are damaged.

Given your back story I think you need to run a full battery of tests on your wife, culminating in a human centrifuge set to 4Gs.

In all seriousness, while this is likely a coincidence based on two older monitors dying, you should suspect the power supply and shared components rather than the PC. A power conditioner could help. If during your tests you spot your wife turning on the whole mess of PC, Monitor, Speakers, Printer, and Scanner on one power-strip with one flip of a switch, then that's your problem there. Other problems are being hooked into the same power that an office-copier uses (damn those toner warm-ups), an air conditioner, or a refrigerator (compressor starts and stops). If your wife is like mine, and thinks a space heater or humidifier near the PC is toasty fun or soothing respectively, you need to calmly explain electronic environmental limits.

If you must break out the toys, get a multi-meter, an AC grounding tester, a trip monitor (it lights up once the voltage drops below 100v, and again if it peaks 125v), and an amperage gauge. These are fun because you can loop it around the power cable, and see what happens when you turn stuff on. An oscilloscope is an indulgence you probably can't use to accurately gauge anything unless you've already used one for a while.

1
Can a Power Mac 8500/180 use a LCD monitor?
1
Possible power surge destroying monitors?
1
What in a monitor determines the amount of reflection that is given off when looking at the screen?
3
How can I check if it's my LCD or the LCD Cable that's Faulty?
0
My secondary monitor gets a lot hotter than my main monitor. can I mitigate this without buying a new monitor?
3
Why do laptop manufacturers turn off only the backlight not the whole LCD?
0
LCD monitor works for a few seconds, then goes black