Why would my computer start booting then suddenly turn off?

I removed the CPU heatsink/fan unit from my desktop computer and put it back.

Now when I turn on the computer, it starts to boot, gets to where it starts checking devices, then just turns off completely. I've restarted it 5 times but it keeps turning off, will never start booting windows at all.

I even completely removed the heatsink/fan thinking it might not be fastened correctly, but even without it, the computer still begins to boot then just turns off all of a sudden.

One thing I also did was remove a thick layer of (what I thought was) dust from the top of the CPU and the bottom of the heatsink. Reading the answers below, it seems that I removed the hardened thermal paste.

What can I do to get my computer to boot correctly again?

EDIT: I just turned it on again (without the heatsink/fan unit attached), it got to where it found its memory, then it said, "CPU fan error!" and turned itself off.

So I need to put the CPU heatsink/fan back I figure. But the problem is I can't get the four little pegs to fasten securely into the mother board, the little plastic tips bend this way and that and I can't get all four of them to get into their holes all at once, I've gotten three in but not all four. Is there a trick to this that I don't know?

EDIT: one of those little plastic pegs broke of, so I'm just going to get a new heatsink, thanks AlbertoPL for the tip of getting one of these so I don't have to deal with those little clips anymore. 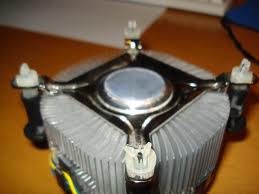 I bought a new LC-Power fan for 15 euros ($20) which came with a little bag of thermal paste, was a bit difficult to get even the new pins in the mother board, you have to press so hard you think you are going to crack it, but finally worked, computer started immediately first time and fan is MUCH quieter!

There can be three things wrong in your case.

Even without any thermal paste layer, a stock sink usually lets a processor run at almost max temperatures (you are discouraged to do this)

Is your computer overheating? I would check to make sure the fan is operating properly. Improper cooling will cause the computer to shut itself down.

Edit: Get a mounting clip to make placing the stupid Intel pins easier.

Be sure that heatsync is properly touching the CPU as well. If you removed it, chances are you disturbed the thermal compound on it and this needs to be cleaned off and replaced.

As a note, you can get a can of compressed air to clean the fan next time. Saves a ton of time and wont damaged your CPU if used correctly.

Did you remove just the fan, or the heatsink as well?

It's also possible you somehow disturbed the heatsink in the process, which effectively does the same as removing it. If the fan seems to be working ok (is blowing hot air), your best bet will be to remove and reseat the heatsink like above.

I doubt it would turn off after 5 seconds even with the fan off if the heatsink were worth anything. Unless it's a sauna in your room or something, of course.

The CPU fan header is at the top right side of the ASUS P5B MX motherboard. 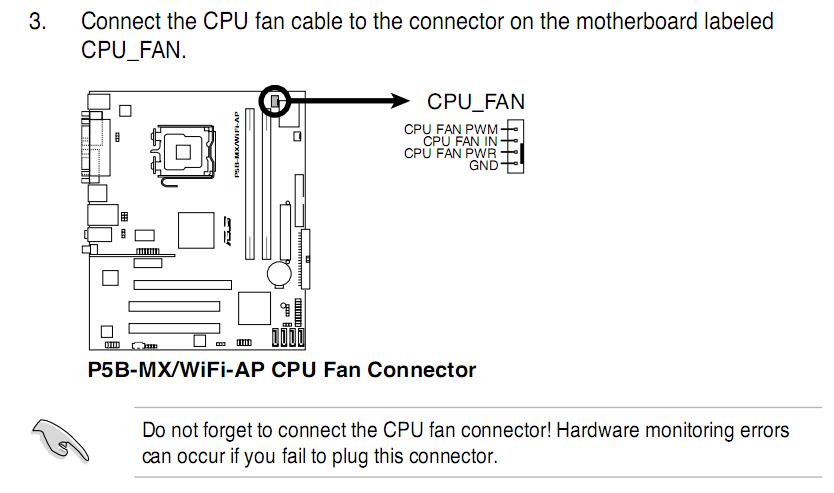 You should be able to connect the CPU fan to the bottom three pins.

Not the answer you're looking for? Browse other questions tagged boot cpu or ask your own question.

2
Computer Turns on Briefly then right back off again
3
Computer suddenly shuts down
1
Thermal paste was installed on my new heatsink. Does it need to get re-applied if I remove it?
2
Hardware issue: computer plays beep sounds at startup, and then turns off
0
New computer build unable to start
0
Why has my CPU suddenly started running hot?
1
No Thermal paste on box CPU?
1
How to tell if CPU is actually overheating or is a false positive?
0
PC repeatedly turning OFF and ON due to CPU overheat