What makes a laptop overheat?

Is there a correlation between CPU usage and heat? RAM usage? Other things?

How can software affect overheating in a laptop?

Is there a correlation between CPU usage and heat?

Yes. Most modern-day computers allow the CPU to "down-throttle" at idle, use less power (thus producing less heat). This is why when building desktops, it is common to "burn in" a CPU by using it at 100% load for a few hours to determine the highest temperature that is hit.

It should also be noted that while core frequency does contribute to heat, this effect is much smaller then how much CPU loading causes the temperature to rise. This is because certain instructions use different electrical pathways in the microprocessor. To give a real-world example here, there have been various power viruses written in the past, which take advantage of this fact to repeatedly execute specific machine code which draws the most power (and thus produces the most heat).

While RAM usage does correlate with how hot the individual memory chips get, this effect is very insignificant compared to CPU/GPU loading (since the memory is clocked at a constant rate). It is highly unlikely to be the cause of any overheating issues.

The other two things that come to mind are the GPU and the motherboard itself. As with the CPU, a GPU can down-throttle at idle, and use less power when not in use (and thus resulting in lower temperatures).

How can software affect overheating in a laptop?

Software is the primary factor which determines CPU and GPU usage, since software essentially controls these hardware devices. As such, using software which constantly loads the CPU will cause any computer to heat up more then it would at idle.

The last thing that most people with a laptop do not think of is the power supply (AC adapter or battery). Regardless of the situation, if your computer needs more power for some reason, your battery or your AC adapter will get hotter with the increase in power draw. I only mention this here, however, because this effect is not as significant as those I have listed above.

One more small addition I think is worth mentioning, is that thermal paste loses it's heat conducting properties over time. This is for a variety of reasons (heat exposure, oxidation, evaporation, etc...), but it is an issue nonetheless. Thermal paste has a few years lifespan in a computer, and afterwards, it may be worthwhile to "re-seat" your heatsinks (both in your desktop and laptop) with new thermal paste.

Put simply, the more complex the task a CPU has to perform, the more power it has to spend in order to solve it quickly, much like driving a car uphill requires more gas. A direct byproduct of this is excess heat.

If your computer is just sat at the desktop, the CPU will only use what it needs to maintain the basic background services and interactivity. If you are doing something very complex like playing modern 3D games or encoding video, power use will ramp up exceptionally.

Of course, as the others said, CPU usage can be a factor if it is running constantly at 100% usage, but to answer the main question, "What makes a laptop overheat?", probably the single biggest thing is not using compressed air to blow out your heat sink/cpu fan.

I recommend doing this on a regular basis, at least monthly, and your laptop will probably live a lot longer.

There is a direct correlation between CPU usage and heat.

I recently witnessed 14 machines in a computer lab run stupidly hot after being upgraded to Windows 7. Disabling the eyecandy brought the temp down immediately. In general, if you are having heat issues and suspect software as the culprit, disable unnecessary services.

Computers are huge hubs for heat because of the constant use of all the components to create a nice GUI display and be able to run eleventy billion applications are once. This is why all computers should have fans strategically placed to create air flow (not just push air around but circulate it) and a heatsink on top of the CPU.

In the case of a laptop, there's a lot less room and usually heatsinks are not as big or efficient. Most laptops have fans on the side that attempt to create some circulation, but it doesn't help that most of the time the laptop is resting on a thermal insulator (material that doesn't conduct heat very well, ie a wood table).

The CPU is the central part of the computer and most of the data will end up going through it. That means that the more things your run and the more load you place on your laptop will make the CPU work harder and therefore release more heat. All this coupled with minimal air circulation and a thermal insulator makes laptops get very hot very quickly.

As for your question about RAM, every component of a computer will give off some heat. The CPU is just the obvious one to rip on. Some higher end graphics cards even come with heatsinks on them to help cool them down.

This is what happens when the air doesn't circulate enough.... 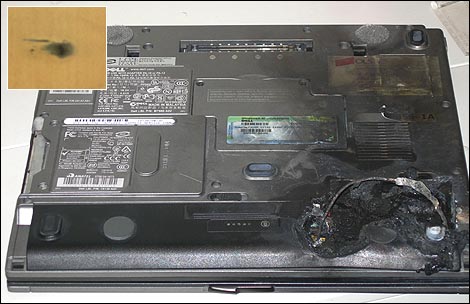 Other:
Unfortunately "laptops" are mis-named, if you use it on your lap (without a tray) then the chances are that you're blocking some or all of the cooling vents.

A brand new laptop might get warm but it should not overheat, not unless you are running Crysis with all of the options enabled :-)

However, over time the fan that does the cooling sucks in more dust than it blows out. As a consequence the cooling no longer works efficiently. It then has to come on more often, having the consequence of sucking in more dust. This in turn stops the fan working effectively. Eventually the fan is on the whole time doing very little cooling. At this time the laptop overheats and you get those little BIOS 'I had to shutdown' messages.

Another problem that happens over time is that when the laptop runs hot the thermal paste between the CPU/GPU and the peltier-effect big copper tube dries out and no longer transfers heat away from the CPU/GPU.

So, to answer the question based on a real-world scenario: What makes a laptop overheat? - the fan (and cooling fins on the big copper tube) getting covered in insulating dust and grime followed by the thermal paste on the CPU drying out.

To remedy the situation you need a vacumn. Simply suck the dirt out of the vents. If the problem persists, follow the instructions in the service manual (or on YouTube) for taking part the laptop, give it a clean, check the thermal paste on the CPU has not fried, put some new paste on if it has, then put it back together again (fully in anticipation of having at least one screw left over).

Another cause of overheat is when cooling fan vent is blocked, like when laptop is on bed or if it is faulty

5
Where does most of the laptop heat come from?
5
Are Laptop Cooling Accessories (Pads, external fans, etc.) Effective?
8
Does heat sink compound degrade with time?
1
Lenovo T520 overheating when playing Counter-Strike: Source. What can I do about it?

5
Suggestions on keeping laptop cool
3
Why does my computer overheat so easy?
18
Will an SSD help prevent laptop overheating?
4
GPU overheat on HP G62 laptop
0
VAIO Laptop overheat
0
Does aging cause laptops to overheat?
0
Proper ventilation in a tight space on a laptop
0
Laptop heatsink temperature