Edit: I don't like tabs. I want consoles in 2x2 grid arrangement in one window.

It sounds like you want to run screen in your terminal. 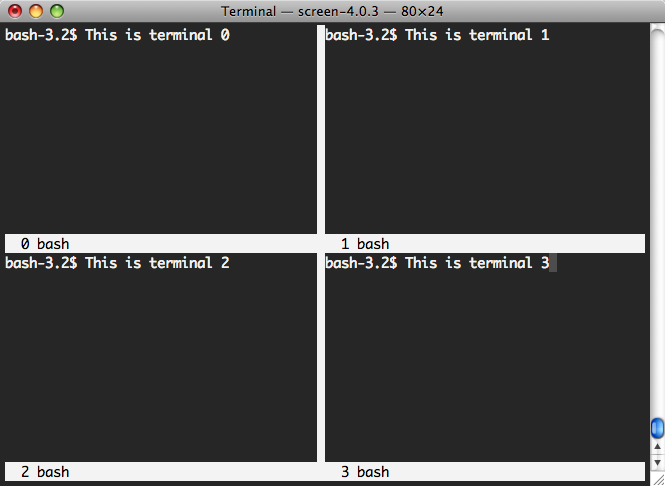 (edit: las3rjock) The screenshot has been updated to show screen with vertical as well as horizontal splits. Since the version of screen that comes with Mac OS X does not come with this feature, I built it from CVS according to directions I found on this blog. I assume you could do the same for Linux by skipping the patch steps.

The goal of this project is to produce a useful tool for arranging terminals. It is inspired by programs such as gnome-multi-term, quadkonsole, etc. in that the main focus is arranging terminals in grids (tabs is the most common default method, which Terminator also supports).

Much of the behaviour of Terminator is based on GNOME Terminal, and we are adding more features from that as time goes by, but we also want to extend out in different directions with useful features for sysadmins and other users. If you have any suggestions, please file wishlist bugs! (see below for the address) 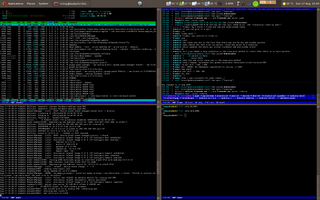 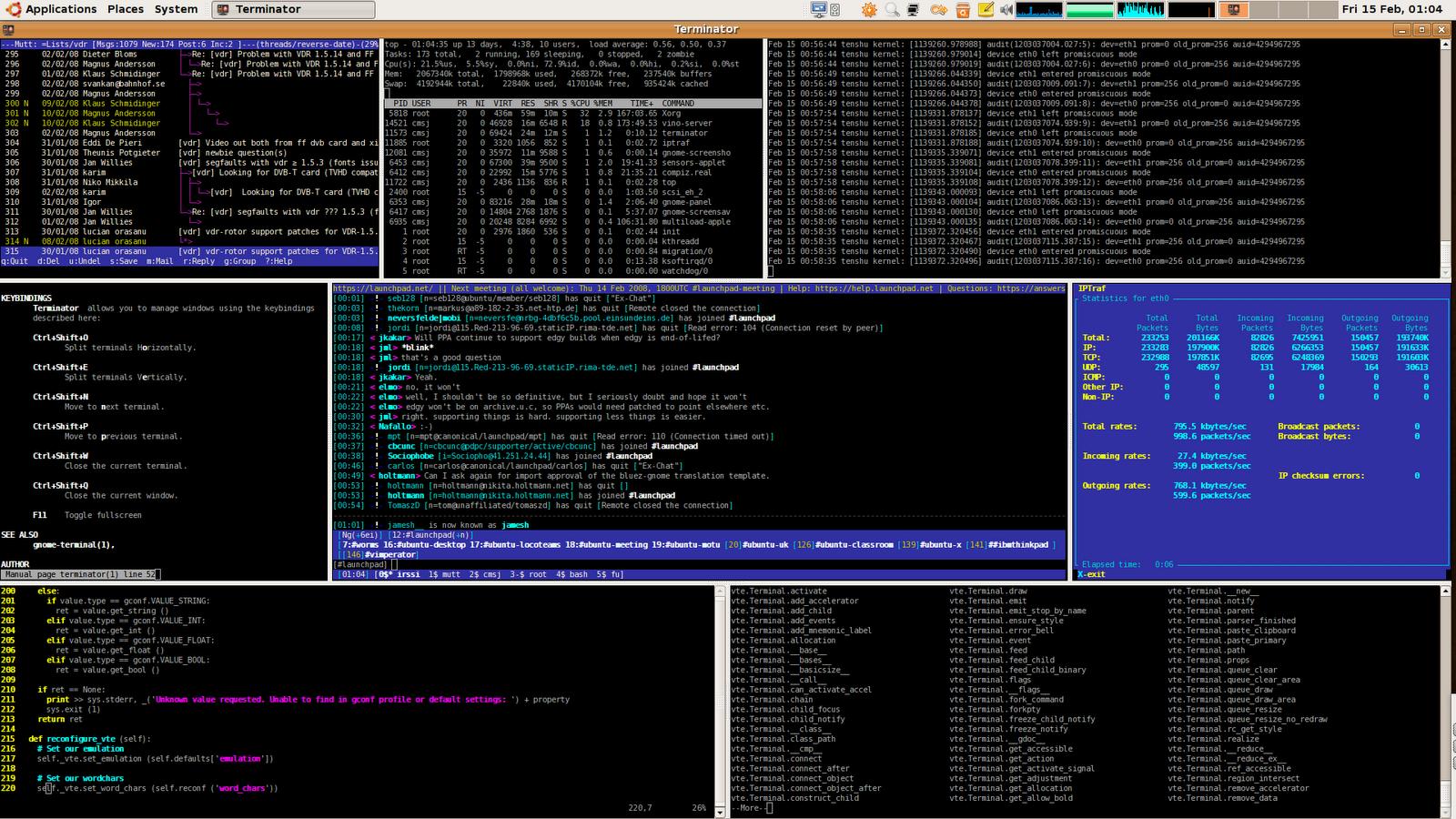 Please look at my blog entry about tmux found here... That is way more powerful than screen, in short, the config file in the attached blog entry re-configures the tmux shortcut keystrokes to simulate screen, originally tmux uses the Ctrl+B combination in order to not to confuse screen utility. And the keys are reconfigured so... instead of Ctrl+B, Ctrl+A is used:

Konsole is the best, multitabs and some other cool stuff.

Both are pretty nice.

Though I still prefer gnome-terminal with tabs :-).

If the current answers don't give you the flexibility or feeling that you want you may also want to have a look at tiling window managers. This ofc is a big change just for tiling terminals but if you are planning on doing the majority of things in tiled terminals a tiled WM may have benefits over the other solutions.

you could use splitvt to split ANY terminal window in two - one above the other, not side-by-side.

However, while it is possible to split the terminal horizontally or vertically (or both) in some terminal emulators or in screen, you are limited to 2 or 3 or perhaps 4 side-by-side before they become too narrow (or short) to be of any use. IMO, tabbed terms combined with a program like xttitle to set the tab title is a lot less confusing and a lot more useful. YMMV.

other people have already mentioned screen as well as eterm and mrxvt and others, so i'll point out a feature of gnome-terminal that you might have missed.

you do realise that you don't have to alt-tab between terminals in gnome-terminal, don't you?

if you're using tabbed terminals, you can use Alt-1, Alt-2, Alt-3 etc to switch between the terminals.

BTW, i mostly use mrxvt as my terminal of choice - but gnome-terminal is installed by default on most linux systems so i've got used to how it works. i prefer mrxvt but GT is OK or good enough for light/casual use.

I generally prefer Xterm with tmux, which you can configure to split the terminal. See the tmux manpage

Not the answer you're looking for? Browse other questions tagged terminal gnome or ask your own question.

3
How do I create a hierarchy of terminals or workspaces?
1
What keyboard shortcuts exist for navigating the window selection mode of the Gnome Shell
0
Create custom launchers in GNOME 3
2
In Gnome Shell, how do I prevent all windows of an app from getting focus when I focus just one of them?
0
How do you cd to the directory of another screen window?
1
Console vs terminal
0
Odd terminals splitting/panning - compared to IDEs/text editors