When I was a kid we had a 486 DX, 33mhz machine. Pretty sweet eh? Well as it got older we tricked it out, added 8 megs of ram so we could place Space Quest 6 and an 2x External CD-Rom drive etc... I understand how most of those things worked now that I've got my CS degree although it's still a little hazy and magical.

But one thing I just realized I never understood was what was the big green Cyrix 586 overdrive chip that my dad put in to crank it up to 100mhz. Was 586 a misnomer or a marketing thing?

How were the Cyrix and Intel processors related so that you could switch these around? And, as an aside why don't AMD and Intel do similar things with their processors today? 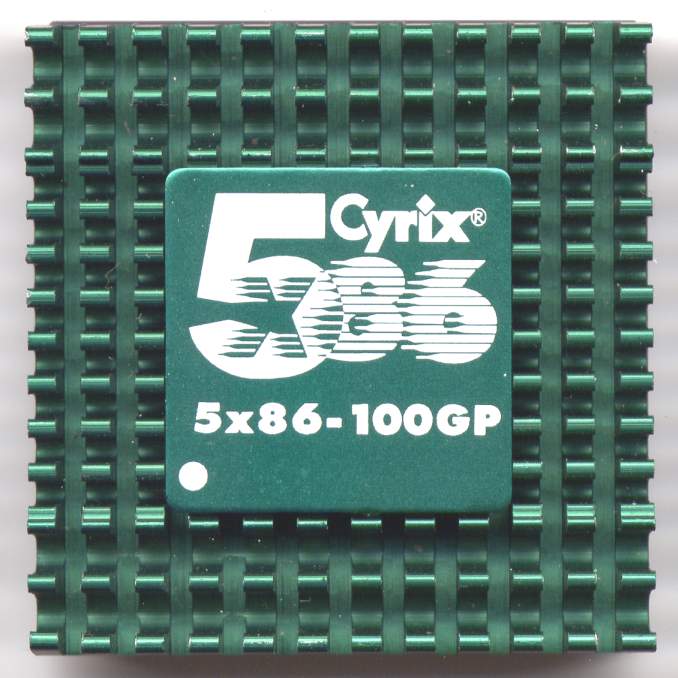 These chips were "586" replacements that were socket/chip-set compatible with the 486. They were reworked electrically, and reduced in functionality (mostly just clock speed though) to give a "586" instruction set to a "486 platform".

The Intel ones were called "Pentium Overdrive" and the AMDs were referred to as "Am5x86". Cyrix (tech. now own by Via) also made a "Cx5x86" replacement.

In a very brief nutshell, this 'pin compatibility', and all things legal and technical that go with it, is what led Intel to decide against using "586" and start using "Pentium".

They don't maintain compatibility between brands today for many reasons, mostly market-share and legalities I would assume. :)

The idea of "Overdrive" was dropped for a couple reasons (at least).

It reduced the need for new 'whole-system' upgrades, and was actually slowing down the pace at which the 'whole-system' technologies could progress. Also, motherboard manufactures didn't like them. ;)

It was also cost-prohibitive in many cases, as you could get a whole new system without the 'old motherboard' speed/tech limitations for not much more money; especially if you kept your drives and chassis. Which, from my personal experience back in the day, was what 80-90% of (business/corp) customers did.

Not the answer you're looking for? Browse other questions tagged cpu history or ask your own question.

2
When did the Pentium II come out?
4
What protocols did the ARPANET use?
0
Motherboard/Intel G43 Chip Overheating
3
Intel Virtualization Technology not showing up on apparently supported chip
9
How does Intel Turbo Boost work?
0
How did the first microprocessors knew the meaning of binary codes?
3
486 computer does not POST
0
Did I kill my CPU by cleaning the computer?