I have recently joined a company and there the developers PC runs Ubuntu. The development environment is however .NET and so, each developer gets a Windows 2008 R2 Standard Edition Virtual PC with Visual Studio 2010 / SQL Server installed.

When I launch the Windows 2008 R2 in VMWare and get the properties, I see this - 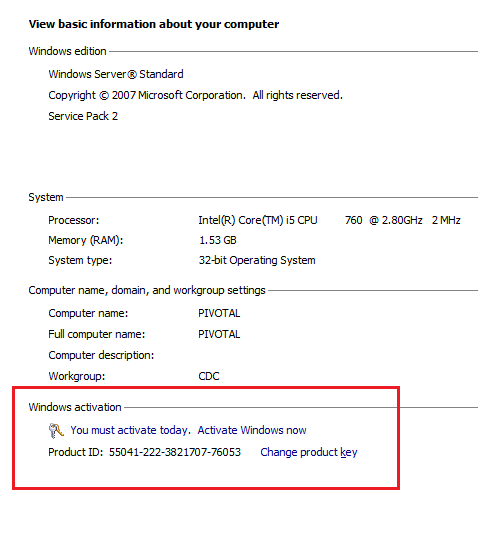 In addition, if I lookup on the desktop, on the right corner, I get this message as well.

And the developers tell me that this VM is available since January. How could that be possible?

I have checked if they have some scheduled script which extends the trial period (as described here), but no, they have not.

The Developer / SysAdmin guy who built this VM has left now and no one else has an answer.

Can someone clarify how this can be even possible?

Hard to tell what he did prior to you (but I suspect it was not right, or a trial expired), but what that means to you practically, is that you need to get a key and activate the server to be legal to use it.

If you are a group of developers, I recommend that you purchase an MSDN subscription. It cost anywhere from $699 to $11,899 per year depending on the tools and options you choose. If you already have purchased MSDN, ask for your key, change your current key, and then re-activate.

With MSDN, you can use them for testing and development, but they are not legal for production servers that you run your business on.

I do not agree with William because with MSDN, when activating servers (at least), there is no limit. My thought is that it was probably a pirated install.

http://msdn.microsoft.com/en-us/subscriptions/aa718661.aspx ("Install and use the software on as many machines as you need"...I have installed the same software on many VM's and never run into a limit personally. Different products, for partners and their use in production environments, do have limits.)

Simple... Windows does not "Require" activation any more.

When you restart the machine, you may simply have to wait a few seconds when Microsoft will tell you the benefits of a legal copy, but, you are under no obligation to actually register (other than the legal one of not running pirate software).

You will be restricted in a few ways such as not being able to run any software that requires Windows Genuine Advantage (Microsoft Security Essentials e.t.c), you will not be able to get a desktop wallpaper and most importantly, no Windows updates.

I see it quite often in development houses such as yourselves where this sort of thing happens - not because people pirate but simply they have MSDN or similar editions of Windows and it is fully legal, but do not want to burn through their activation count. (or people activate, take snapshots and restore often).

Unless you do not have a MSDN and/or you know the company is deliberately trying to avoid the licensing fee, they probably are not actually doing anything wrong...

...I myself have several VMs that I have been running for over a year which are not activated for the exact same reason I mentioned above - it is fully licensed and even though I can request more keys if I run over the activation count, it is just easier not to when there is benefit to doing it.

Not the answer you're looking for? Browse other questions tagged virtual-machine windows-server-2008 or ask your own question.