I've got a couple of partitions on my primary hard drive that I somehow managed to mount quite some time ago. Both partitions are EXT4, and not readable by Windows. (Back when I originally mounted them, they were EXT2, and I had a driver that worked for reading/writing them). Currently they show up in my computer as E:\ and F:. I'd be content to let them stay there, useless, forever, but I will be passing this machine on to another user shortly, and attempting to open the drives results in a "Would you like to format this disk?" dialog, which is obviously dangerous. I want to dismount both drives so that they don't show up in my computer.

The standard way of dismounting drives like this is through computer management, where one could normally just remove the drive letter. However, that option is not available: 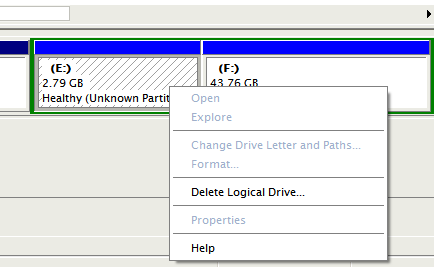 Other things I have tried:

Please note that I do not want to delete the partitions, as they are still used by Linux.

Any suggestions are welcome.

You will probably have to use diskpart from an elevated command prompt.

Then do the same for the other partition.

This will remove the letters, but I am not sure you can keep them dismounted on the next boot, but the letters should remain gone.

I hate to answer my own question, but I managed to get the drives to dissapear. I installed a later version of Ext2FSD (which includes EXT4 support), the Windows EXT driver that I used to mount these in the first place, and it was able to permanently unmount them.

Not the answer you're looking for? Browse other questions tagged windows partitioning or ask your own question.

6
Dismount a USB Volume from Command-line