What's the maximum typical speed possible with a USB2.0 drive?

Ask Question
Asked 11 years, 6 months ago
Modified 17 days ago
Viewed 563k times
93
Want to improve this post? Provide detailed answers to this question, including citations and an explanation of why your answer is correct. Answers without enough detail may be edited or deleted.

I'm getting only 30MB/sec between my computer and a USB drive, despite the fact that USB 2.0 supports 480Mb/sec (or 60MB/sec) transfers.

(Therefore, I'm only getting half the rated speed) Is there something present in the USB standard which should result in such half apparent speeds?

This other document from Cypress says near the end that they actually acheive 43 MB/s.

In practice the limit will usually be the flash itself.

Edit: This information is actually also in the USB 2 spec. 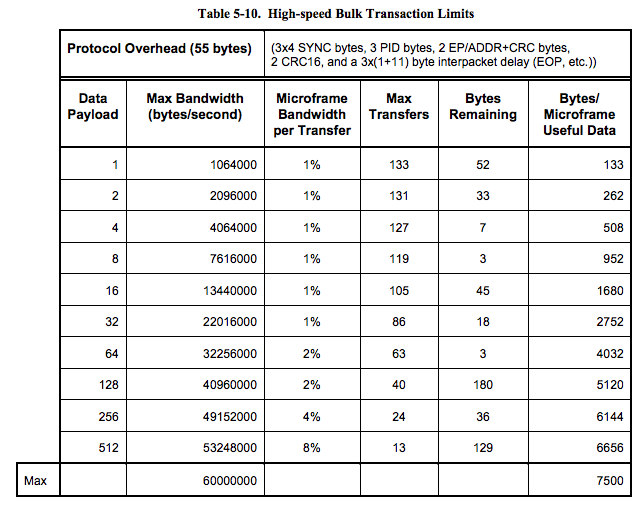 Your flash drive is the bottleneck. They can't reach the 60 MB/s theoretical maximum. Here's an excerpt from Wikipedia:

Modern flash drives have USB 2.0 connectivity. However, they do not currently use the full 480 Mbit/s (60MB/s) which the USB 2.0 Hi-Speed specification supports because of technical limitations inherent in NAND flash. The fastest drives currently available use a dual channel controller, although they still fall considerably short of the transfer rate possible from a current generation hard disk, or the maximum high speed USB throughput. (...)

Typical fast drives claim to read at up to 30 megabytes/s (MB/s) and write at about half that speed. This is about 20 times faster than USB 1.1 "full speed" devices which are limited to a maximum speed of 12 Mbit/s (1.5 MB/s).

Around 30 MB/sec is quite typical maximum transfer speed.

USB 1.0 and USB 2.0 connections are half-duplex, meaning data flows in only one direction at a time. Shared connection between both directions is probably biggest reason for slowdown than expected transfer speed.

In comparison, USB 3 and Ethernet are full duplex and do meet expected transfer speeds better.

In my machine, an USB2 flash drive speed never exceeds 33 MB/s in test application, even though Windows reported 33-37 MB/s speed. I did some testing and enabled disk cache (device properties) and increased usb max transfer size to 2 MB (KB2581464) but could not make it any faster.

The USB 2.0 interface can be a limit due to signalling and command overhead as well as spacing between packets.

I have a fast SSD connected by USB 2.0. The drive is much faster than the interface (by more a factor of 10).

Read Speed maxes out around 33 MB/s and Write Speed at 17.5 MB/s. Write Speeds are almost 50% slower due to a verify-read after the write and the fact that the USB signal is half-duplex as another answer mentions.

If I add a second transfer from another USB2 disk (Packard Bell) connected to the same USB2 hub to the same FW800 drive, the combined transfer rate increases to 42 MB/s. This is exceptional and it's the highest transfer rate I have ever seen on USB2.

More than 35-40 MB/s on USB2.0 is practically impossible and I was already dedicating a USB2 controller only for those disks, no mouse or other devices interfering.

This post is a bit old, so not sure if this is still relevant or helpful, but USB 2 speeds normally max out at 280Mbps (35MBps) due to bus access.

Taken from the USB Wikipedia page:

USB 2.0 supports 480 Mb/s signaling speed. On the Wikipedia page, it says effective throughput is up to 35 MB/s. There is a disparity because bits aren't usually transmitted between devices in the same way that they are represented internally. A number of factors needs to be accounted for when transmitting data between devices, like electromagnetic interference.

The link above is an example of an encoding scheme. It is used by USB 3.0.

I have never really thought much about calculating the speed, but clearly there is real overhead associated with this kind of transfer. I searched on Google and found post after post with speeds as you described, making me thing you are on to something.

I just whipped out a USB 2.0 1TB Seagate external drive, formated it, and decided to copy a sampling large enough to test with: 13,595,211,905 bytes (about 12GBs). I am running Symantec Endpoint Protection AV.

According to this calculator, it should have taken only 3:46 minutes to copy with 0% overhead, but it actually took 9:17, and my speed dropped to 23.9 MB/sec actually.

I then rebooted (to clear the memory), and tried it without my AV running and it still took 9:15, or only 2 seconds less (I guess that is good news for Symantec AV at least).

It would appear that those really are "theoretical numbers".

Any chain is only as strong as its weakest link. The potentially weak transfer performance when using USB2 devices include everything from the host controller firmware, driver software, physical cables used (shorter and thicker may be slightly better?) and probably most importantly the actual connected devices themselves and any firmware, flash/cache chips and most definitely spinning disk performance, a well known bandwidth bottleneck.

Stated theoretical maximum performance (480 megaBITs or 60 megabytes per second) is only for the bus not things connected to it and quite often the actual observed performance is much lower.

USB 2 on Windows seems to top out at around 37 MB/s a second usually, even if the link speed of 480Mbps could support a bit more.

Different protocols are going to have different levels of overhead, and even different timings, and the latter can contribute to a full link speed not being utilised even if you are not otherwise saturating CPU, etc because the protocol has inherent inefficiencies and delays in its acknowledgements back and forth or other aspects of the protocol design. USB can only ever send or receive at any one time, and has to wait to see if anything else is using the bus before communicating in either direction.

Also remember that USB 1.x and 2.0 all share the same bandwidth, with it fairly typical that your host device will use internal hubs to provide multiple ports. Even if you have USB 3 compatible host and hubs, USB 1.x and 2.0 will still have only access to a separate shared 480Mbps - it won't be "upgraded" to use the USB 3 pool.

Here is the setup with USB 2.0 being the bottleneck.

I also did the above test with a regular spinning 2.5" Laptop 500 GB Toshiba HDD as the external drive inside the USB 3.0 Nexstar CX External Enclosure and it starts off with write speeds of 40 MB/s, but as the 500 GB gets filled up it gets slower effective rpm near the centre of the hdd disc and it slows down to 25 MB/s. I know the 500 GB drive is not the bottleneck since it has read/write speeds of 70 MB/s if it was attached to a USB 3.0 port on a newer Macbook.

So once again USB 2.0 maxes out at 40 MB/s and slows down from the next weakest link at which is the 25 MB/s HDD should it get filled up. I suspect other memory like those found in USB flash drives could also be the slowest weakest link if they are the cheap kind.

The 5400 rpm hard disc drives with USB2 are limited by the drive hardware and the SATA controller. Even 7200 rpm or 10,000 rpm drives in a good USB caddy aren't really up to much. You need an SSD to reach the USB2 limit. Most of the "lost bandwidth" is actually controller latency, where it just takes time to turn around from writing the data to sending the completion signal.

PaulPaul
1
3
Add a comment  |
Highly active question. Earn 10 reputation (not counting the association bonus) in order to answer this question. The reputation requirement helps protect this question from spam and non-answer activity.

13
How do I transfer 148GiB files from an Android phone to a computer?
1
Is there an advantage to booting from a USB 3.0 Flash drive?
0
What's the maximum typical speed possible with 802.11n WiFi for local network file transfer?
0
Determine whether my Wi-Fi net actually works at full speed

0
USB transfers very slow (kB/s range only)
0
USB transfer speed for Windows 7 is incredibly slow to my external drive
0
Can a Type A to Type A USB Cable Really be USB 2.0 Only?
5
Why are some hard disk enclosures limited in hard drive capacity?
1
Should all drives on a USB 3.0 (USB3) Hub be the same speed?
0
Does A Hard Drive's Read / Write Speed Affect The Speed Of A Data Wipe / Erase / Sanitise?
0
Why does my USB 3.1 Gen 1 only transfer at 300-340MB/s and not 640MB/s?