Is the cache size or number of cores more important when weighing CPU performance?

I'm shopping for a laptop for my son to use for school, so it doesn't need to be a gaming machine. I've put together PC's from scratch before, but it's been a while.

I've noticed that a number of the available entry-level machines are equipped either with a dual-core or a single-core CPU. I understand that all other things being equal the dual-core CPU will probably perform better. However, what if the single core had a lot bigger L2 cache (say 3 MB for the single core vs. 1 MB for the dual core)? I know this can also significantly affect performance.

I understand that other system components, e.g. the memory speed and graphics hardware, will also affect system performance. My question is, if I have to choose between an extra CPU core or more cache, what should I pick?

Lower CPU cache will result in a higher probability of cache misses, which will significantly degrade performance. That being said, another entire core will allow the computer to run at least two threads simultaneously, so it's a trade-off when you have to pick one over the other. 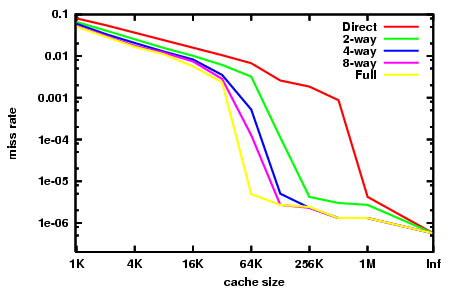 From the above graph, we can see that when the cache size is over 1 MB, the probability of a cache miss is already extremely low, and shows diminishing returns with increasing cache size.

Extra CPU cores, on the other hand, can show drastic speed increases when applications take advantage of the multiple cores.

For most real-world applications, the extra execution core will provide a better gain in performance over the extra cache. Both cache size and core count are vitally important when weighing a computer's performance, but when you are dealing with a relatively low amount of cores to begin with, extra cores will usually provide significant performance gains.

Extra core, easy, for most applications. You can do twice the calculations under optimal conditions. Cache helps, but it does not double speed.

The right choice (dual-core vs extra cache capacity) depends on the target applications that are going to be run on the laptop.

Dual core processors will theoretically reduce the execution time by half compared to a single core processor. However, in practise, the speedup of 2x is rarely achieved due to the challenges of writing parallel applications. Amdahl's law (link) shows that even if application has 90% of the execution perfectly parallelized (a challenging task for large applications) the speedup is 1.82X instead of 2X. The speedup from the second core will only decrease for applications that are not implemented in a scalable manner.

A larger L2 cache capacity will reduce the miss rate in caches as shown in the answer by @Breakthrough. However, the answer draws the incorrect conclusion from the plot that cache capacity beyond 1MB will only provide marginal improvements. The point of diminishing returns depends on the application (particularly, the working set size link) of the application. Most applications are likely to have working set size beyond 1MB and, hence, larger caches will help improve performance by avoiding long-latency DRAM accesses (processors operate upto 3 orders of magnitude faster than main memory)

Finally, while my answer might sound like favoring larger cache over a second processor, I would like to point out that most modern CS curriculum focus on introducing parallel programming to students. Therefore, multi-core processors make more sense even though they aren't clearly the better choice performance-wise

Here are benchmarks for both of them.

Now to figure out if a big number is good or bad.

I would recommend the dual core machine over the single core.

As Windows is basically doing a lot at the same time (e.g. You browse the web, while a Windows Update is downloaded and the anti-virus is scanning the just downloaded file) a dual core system is mostly more "responsive" than a single core machines.

Cache size is important as it reduces the probability that there will be a cache miss. Cache miss' are expensive because the CPU has to go to the main memory to access the memory address, this takes much longer and hence results in a slower computer.

Number of cores is important too since the more cores there are the more process that can be run at the same time. That means that multiple instructions can be running in parallel, resulting in a faster computer.

As you can see, both are quite critical and optimizing both is important, although from personal experience, a multi core processor chip is more beneficial that a bigger cache if you must optimize only one thing...

4
Performance for Intel's new low-voltage CPUs
0
Unlocked Phenom II X2 vs. Athlon II X4 performance
12
How to decrease the CPU usage when running Virtual Box?
39
What is meant by the terms CPU, Core, Die and Package?
4
Impact of the L3 cache on performance - worth a dual-processor system?
1
Setting realtime priority to a process
1
Undervolting CPU Core vs CPU Cache