I'm looking for fonts which are installed on Windows respectively Apple by default which contain either the Windows or Apple-logo .

According to this article it should be character

I know that this is not part of the Unicode-standard but still I'd like to know it.

U+F8FF is (in a way) part of the Unicode standard as the last of the private use characters - so it's appearance is not standardised by Unicode.

Some early Tengwar fonts map Elvish characters to it. The Imitari font draws it as a capital eth.

The font Luxi draws it as the euro symbol.

The font "Standard Symbols L" uses it as one of the box drawing characters.

The official PRC standard on precomposed Tibetan uses the codepoint for the Tibetan syllable "hwo".

Some font makers place a copyright statement or other creator's mark at that code point. For example, the dingbats font "DavysDingbats" uses it to display a face, presumably that of the font's creator.

In most Apple-supplied fonts, it represents the Apple logo, or an early version of the command key.

On Macintosh computers with the US keyboard layout active, the keyboard shortcut for the symbol is Option-Shift-K.

The ConScript Unicode Registry suggests it be used for the Klingon glyph "KLINGON MUMMIFICATION GLYPH." This is followed by e.g. Code2000.

Note: On XP, Wingdings has the MS Windows logo at 0xFF. 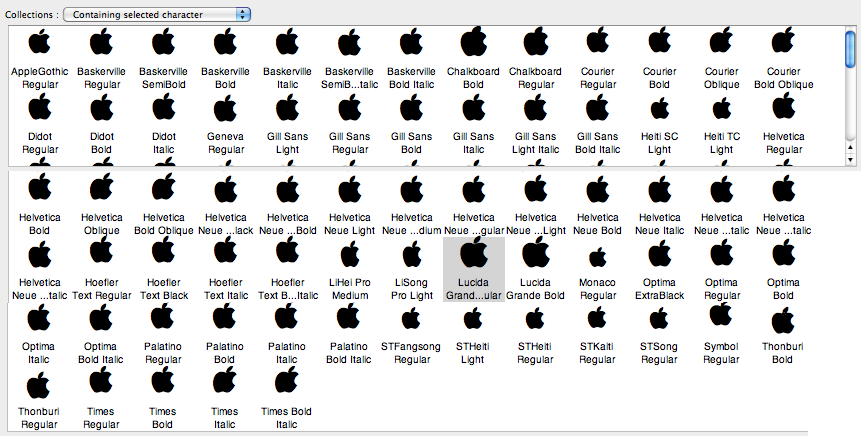 For some reason, the 10.7 CharacterPalette doesn't show font variation for PUA glyphs.

The CharacterPalette.app from 10.6 works on 10.7 as well, but I only realized it after taking those screenshots.

73
How can I display the  (U+F8FF, Apple logo) character on Windows?

7
Font for Wine that supports the entire character set of the Win32 Console?
1
Intelligent font viewer for Windows
16
Some Unicode fonts not working in Windows 7/Firefox
2
Deterministic way to find which installed fonts support a given Unicode character or script?
5
Google Chrome doesn't use proper font in PDF