What is Rosetta and why doesn't Snow Leopard include it by default?

Since I repaved my MacBook with Snow Leopard this morning, I was about to reinstall one of the applications I use, Adobe Flex Builder 3. When I opened FB3's installer, the following was displayed: 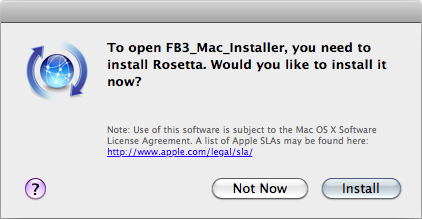 (Dialog says: "To open FB3_Mac_Installer, you need to install Rosetta. Would you like to install it now?")

What exactly is Rosetta? (I have an idea, but your expert answer is probably better than my understanding.)

Rosetta is a piece of software through which PowerPC code can be run on an Intel Mac.

Why don't I already have Rosetta included with my new Snow Leopard install? Why would Apple decide to not include it? Would this have been an optional install from my Snow Leopard DVD, or is it only available online from Apple?

Snow Leopard is Intel-only. Apple essentially wants the few remaining developers who still have PowerPC-only software to recompile it for Intel. Rosetta is an optional install which is available on the Snow Leopard DVD.

Why would a relatively recent installer such as Adobe Flex Builder 3 require Rosetta? Is Adobe doing something silly?

Is there any performance or other impact or concern with having Rosetta installed?

Only when you're running PowerPC code. Simply having it installed will not decrease performance. There is little reason for you not to install it; it's a small package that allows some software to be run slowly that otherwise couldn't run at all.

I've made this CW so please edit this if you have something to add.

According to the Adobe website only the CS4 product range has been certified as Snow Leopard compatible and the compatibility list available here shows that Flex 3 is still untested.

Rosetta is the technology that allows PowerPC applications to run on Intel Macs. From everything I have seen thus far this has been removed from Snow Leopard by default, and based on your screenshot will install when required. Potentially this will be removed in the next OSX version.

Rosetta is a lightweight dynamic translator for Mac OS X distributed by Apple. It enables applications compiled for the PowerPC family of processors to run on Apple systems that use Intel processors. Rosetta is based on Transitive Corporation's QuickTransit technology, and it is a key part of Apple's strategy for the transition of their Macintosh line from PowerPC to Intel processors as it enables pre-existing Mac OS X software to run on the new platform without modification.

The name is likely a reference to the Rosetta Stone, whose discovery made it possible to comprehend and translate Egyptian hieroglyphs.

Flex Builder 3 does not require rosetta to run. Dumb Snow Leopard thinks it does. Just Cancel out and it will be ok.

Not the answer you're looking for? Browse other questions tagged macos installation osx-snow-leopard compatibility or ask your own question.

1
Inventory of apps which require Rosetta

0
Has anyone else experienced page fault crashes with Snow Leopard on MacBook Pro?
1
Snow Leopard doesn't like dnsmasq?
0
How to Downgrade to Mac OS X 10.5 on a new MacBook Pro?
2
Adobe CS4 nearly useless under Snow Leopard
1
How to install XCode on a MacBook Air without a DVD drive?
2
Snow Leopard Server hanging during mysterious IO spikes
0
Setup restarts when trying to create a user
0
MacBook Pro (Early 2011, 8,2) will not boot Mac OS X after installing Linux