Unable to delete folder in windows 7?

I'm unable to delete some folder on my external hard disk. I tried them to delete in safe mode too but I'm not able to perform this. This is a big headache to me now. Even I'm the admin and it still needs the admin privileges to delete them. So how can I get rid of from this trouble? Please help me! 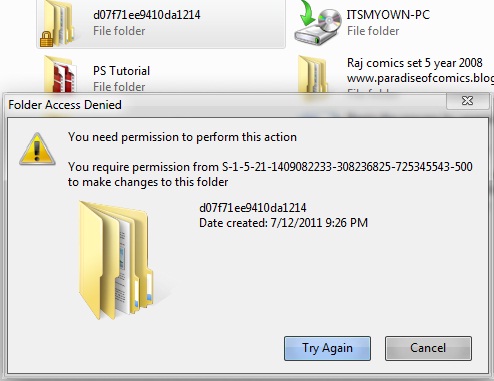 You could also try Unlocker. It unlocks or kills the process that is using the file/folder and deletes/renames it.

Try getting the ownership of the folder:

My husband had the same problem with his external drive. This is what I did to delete it. These are the steps I followed in windows 7 while logged on under administrator...not sure that part was necessary, but I wanted to include that bit of information.

Once you are back in the 'advanced security settings' window follow these instructions (Note: You MAY have to close out the properties window altogether and then re-open it for the above changes to take effect before performing the next set of steps).

You should now be able to delete the un-deletable folder.

Phase 3 (it is a shared folder)

Be sure to do the following steps :

Sometimes you can't delete a file or a folder because the filename or a file which is in the folder contains a hidden character.

You can delete it in a Command Prompt using DOS commands - a bit of DOS command knowledge is needed.

Once you have a Command Prompt open, navigate to that particular folder, and open it. Delete all files in that folder using del *.*.

Exit that folder, and you should now be able to delete the folder.

I used Windows cleanup. I accomplished this by following this tutorial. Its for Windows 8 but works just as well for Windows 7.

Just use this text, save it in .reg file, and run this. After this, you can delete/rename these kind of locked folders in single click.

I've encountered this problem a few times. I've concluded that something in the OS or some background app has a file or folder open, and the system won't let the operation proceed. The error messages are probably somewhat bogus -- they get an error back and assume it's an auth error.

Never tried to "fix" this since for me it's just an irritation, not a "real" problem. (And what's one more irritation from Windows, in the grand scheme of things?)

I had this problem and successfully used the idea of moving and/or incrementally deleting items.

I could not move a folder with two sub-folders and files. It was an old folder, so there was no way anything imaginable could have been using it. I used resource monitor ("search" box, above right section of the handle-and-file sub-window under CPU activity) to verify that the Explorer process window did have something associated. The ONLY process associated with them was the display window (Explorer) and they seem to only have been there because they were within the list of folders being displayed. No other processes were active.

Otherwise, there were no active processes using these files or folders. I checked for lock files or other odd things like hidden or system files and there were none. The command prompt didn't help. Each item had the same name, and I could not move the parent folder in DOS either. NOTHING seems to explain why I could not delete the parent folder, so obviously my knowledge of the intricacies is deficient.

I managed to use Windows Explorer to move each folder's files to another folder (even used the same folder names, but did not copy the name in case an invisible character was there). After moving files, I deleted the folders. Then I put them all in a duplicate file structure right where the old one "was", to see if I could (I could). Finally, I moved the folder (and contents) to its intended new destination. I'm happy! :-)

I also had this problem on Windows 10 with a directory in one of my projects (so not one created by Windows). I got a similar message, but instead it said that it required permissions from me(?). An elevated command prompt didn't work either. Getting ownership and resetting the permissions also didn't fix the issue. Yet after I rebooted my PC I was able to remove the directory (sigh). Probably one of the files was being held by a process.

Try changing the permission of the folder first. Make it editable by you.

If that doesn't work, try running explorer.exe as the SYSTEM user.

26
Can't delete folder, need permission from adminstrator?
0
Deleting a folder in windows 7: Permission denied
1
Undeletable desktop.ini file
9
Grant access to User folder on external drive
2
System Access Denied Unable to Delete Folder
2
Delete the folder
0
How to delete parent folder on Windows 7 VM, without deleting child files first?
0
What are these strange folders and how do I delete them?
0
Curious folder on the root of volume on windows server 2008

1
How do I delete a previous Windows partition?
31
How to delete $RECYCLE.BIN folder on external hard disk?
2
Can't delete system files from System32/drivers. Need permission
1
Windows Explorer keeps on restarting while accessing a specific folder
2
Cannot delete a directory in Windows 7
0
I'm unable to delete (or modify) .vbs files
1
I can't delete folder on windows 7 and windows 10 even i have admin rights