Why doesn't it appear to be possible to have multiple pinned taskbar buttons for multiple Chrome profiles?

I have two Chrome profiles set up using the --user-data-dir=<path> argument and I want to create two separate pinned task bar buttons for these two profiles (this is obviously on Windows 7). However, whatever I try, whenever I launch the second shortcut, Windows again merges them into a single (grouped) button.

I tried all the tricks I could find mentioned on the net (e.g. here):

I also looked into the approaches of using batch files or task scheduler links but while those do indeed allow me to have a persistent shortcut to the second profile on the taskbar, once I launch it the actual launched Chrome window gets grouped together with the first instance again.

There appears to be no problem pinning any number of web pages to the task bar as "app shortcuts" so I'm not yet willing to let this go... But how does this work? How are these "app shortcuts" different (to Windows) from the shortcuts I created so far? Can I somewhere define a new application ID that makes the shortcut distinct from the others and thus prevents grouping?

(From what I've read it seems some of the tips mentioned above actually used to work at some point. The fact that they no longer do, might be due to Win 7 SP1 or the version of Chrome I'm using (13.0.782.112 as of this writing))

once I launch it [sic] the actual launched Chrome window gets grouped together with the first instance again.

That’s the problem. With older apps, the hacks you mention will work. However, because Chrome has built-in support for Windows 7 jump-lists, as soon as you run it, any of your hacks suddenly go bye-bye.

(I just tried it myself and the manually created shortcut was deleted—without notice!)

Unfortunately it’s a case of un-progress. Your best bet is to file a bug report and “star” this issue that is at the basis of the problem (hbono said they started working on fixing it over two years ago).

A tool to try is the Taskbar tweaker, which will allow you to take windows of the same application into different taskbar buttons.

MachieChan's solution seems to work, but it can be simplified.

In the bottom left of the popup window, click 'Add desktop shortcut'

Switch to any other users and repeat.

Close out of all instances of Chrome.

Unpin all Chrome shortcuts from the taskbar.

Right Click > Pin to Taskbar on each profile shortcut on the Desktop.

Note: You can move the shortcuts to any directory you want before pinning them.

I thought I would share a simple method I used that requires no 3rd party software, just a few steps. 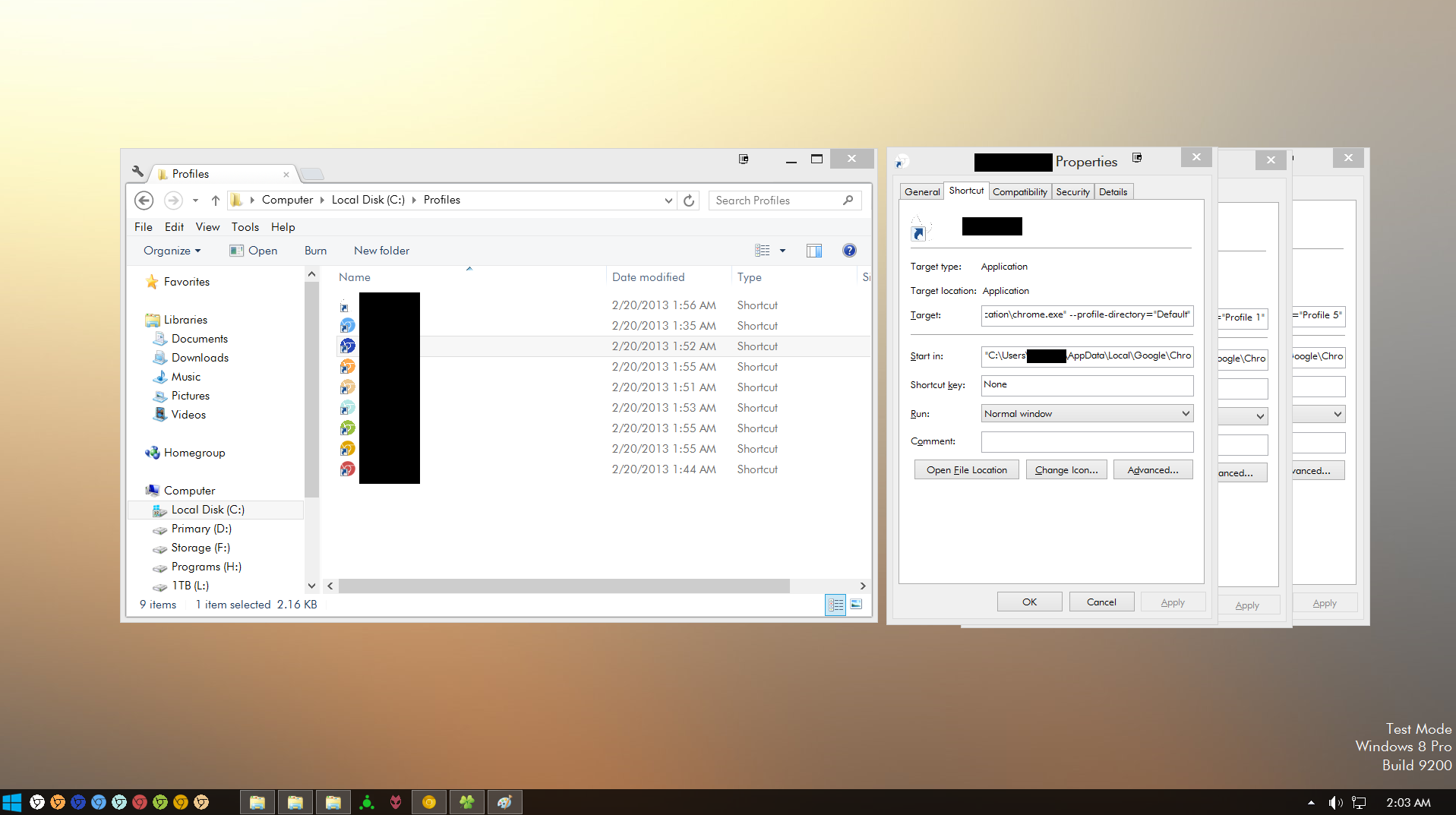 @djfdat's solution does work (and is the easiest way). Just want to add that you probably need to remove existing shortcuts on the desktop first (especially the ones Chrome created for you by default) before generating new shortcuts using 'Add desktop shortcut' button in Chrome. Purely pin the existing default shortcuts may not work as least in my case.

This also fix the problem of opened Chrome window being grouped to the same shortcut as well (see pic below).

Note: The pic was taken in Windows 10 Insider Preview

0
How do I create a shortcut with switches that contain quote marks?
13
How can I set different taskbar icons for Firefox profiles in Windows 7?
2
Unmodifiable windows shortcut link : how to alter them?
1
Configuring Windows 7 Quick Launch taskbar icon (for Google Chrome)
6
How did I pin Chrome to my Win7 TaskBar multiple times?
1
Google Calendar Shurtcut Opens Additional "New" Tab
0
How to add arguments to profile chrome or global chrome (with profiles) shortcut?