Is it possible to query the launch services database for applications that will open an arbitrary file or UTI type?

I am able to use mdls to show the Uniform Type Identifier (UTI) for an arbitrary file as well as the hierarchy of types that are supersets of a specific UTI.

Are there any tools that can show which Apps have registered for a particular UTI other than trial and error?

It's clear from inspection that the foo.command file will be opened by Terminal.app, but it's not at all clear that foo.ksh currently belongs to TextEdit.app.

I'd like to be able to read the Mac OS X Launch Services database directly without actually resorting to using open to see which app is chosen on a per UTI basis. It would be like having --preview --verbose switches to get open to tell me what is would do rather than doing it.

Even better would be a way to list all apps that could open that UTI, even if they are not the preferred app.

To get this secondary information, I have to create or find a file for each type of interest and use Finder to manually show which apps could open that UTI. 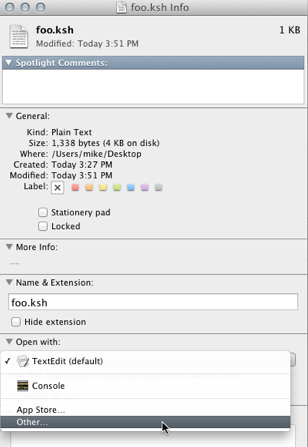 Andrew Mortensen’s duti is a CLI that will list UTI handlers:

See the man page for duti.

EDIT: as Lri points out in this answer, duti does not seem to list all possible applications (possibly because it does not take account of UTI inheritance? That would be a matter for further inquiry). His recommended solution, AllApllications would obviously be a better answer.

You can use this command to examine the launch services database. The -dump option gives you the entire database, then you can pipe this into grep and search for whatever you like.

Not the answer you're looking for? Browse other questions tagged macos osx-lion or ask your own question.

5
Access Finder's “Open With” menu from the commandline (for tab completion)
2
OS X: Terminal command to check a file's default application
0
Command to list all apps capable of opening a given extension

13
Can I change the order of non-apple icons on the menu bar of my MacBook?
0
OS X “service” for running JavaScript bookmarklets in any app?
0
How do open a HTML file as text on OS X?
3
Create bash script to open URL in Mac OS X
2
How can I externally open a terminal with specific “settings” in Mac OS X Terminal?
0
Force multiple Applications in the “Open with…”
6
How to Re-install an App that Shows up in the Appstore as 'Update' Instead of 'Buy App'
0
How to replicate the “Move to Dropbox” Mac OS X Finder context menu item for other apps?
1
OS X command to make current terminal window full screen
0
Hide/reset what a Macintosh knows about a downloaded file?