What Is Minimum And Maximum Processor State In Windows 7 Power Management?

I am talking about this: 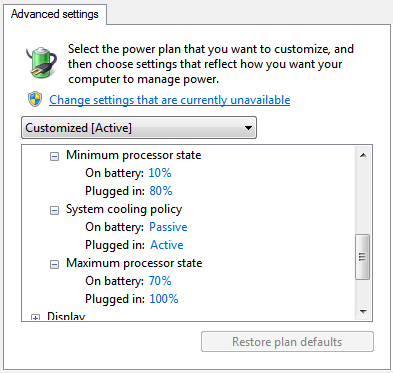 What should I set in minimum and maximum? I want good CPU performance but not overheated CPU and fan working like crazy.

These settings determine the range of performance states (or P-states) that Windows will use. In effect, this will vary the processor's clock speed and, if supported, voltage and FSB speed - increase them to meet the workload requirements, or decrease them to reduce power consumption and heat output.

To elaborate, most processors support a number of P-states, which are a combination of a frequency multiplier (also known as frequency ID or FID) and supply voltage (voltage ID or VID). A processor's clock speed is the product of FSB speed multiplied with the FID, so by choosing a lower multiplier, the clock speed can also be lowered. Some processors1 are also able to cut the FSB speed in half, resulting in what's known as SuperLFM (Super Low-Frequency Mode).

The number of P-states supported varies by processor, but is usually around 5-10. Since Windows allows a total of 100 different values for the processor state, this means that not every value will result in a different P-state being used. In other words, going from 100% to 99% or even 90% might have no effect whatsoever on the clock speed. Also, depending on which P-states are supported, the actual clock speed might differ considerably from what you might expect from the percentage; specifying 50% in Windows power options doesn't necessarily mean that your processor will run at 50% clock speed. For instance, on my Core 2 Duo T9550 with a nominal clock speed of 2.66 GHz, setting the processor state to 50% doesn't give a clock speed of 1.33 GHz, as might be expected. Instead, Windows chooses the lowest supported multiplier (FID 6), which results in a clock speed of ~1.6 GHz (FSB 266 MHz × multiplier 6 = 1596 MHz), or 60% of the nominal clock speed, as evidenced by the image below.2 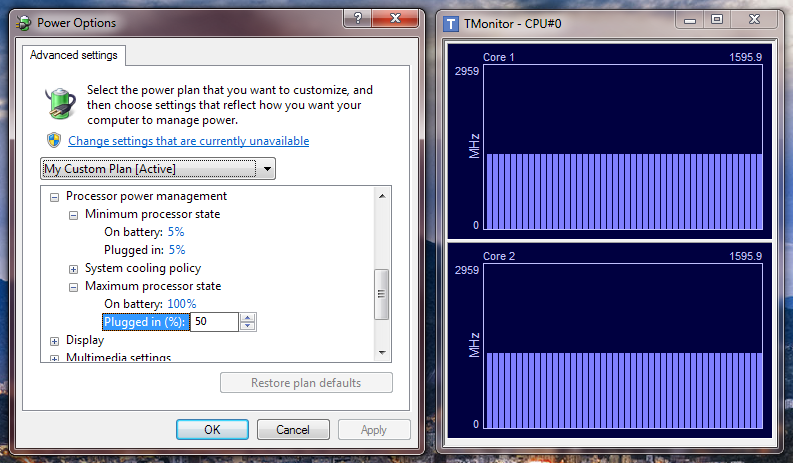 According to the documentation available here:

Windows Vista employs a DBS algorithm by using all available performance states that fall within the range described by these upper and lower limits. When choosing a new target performance state, Windows Vista chooses the closest match between the current power policy setting and the states available on the system, rounding up if necessary.

Intelligently choosing the percentages for Windows power options, then, involves finding out which P-states your processor supports, deciding the minimum and maximum clock speeds you wish to use and then entering the percentages that result in those clock speeds. There's no single correct answer as everything depends on your goals - whether you want to maximise performance or battery life, reduce temperatures or something else entirely. Experiment and see what works out best for you. Personally I've found that setting minimum and maximum to 5% (low enough to force lowest multiplier regardless of processor) and 100%, respectively, gives the best results. Yes, even on battery. While it might seem logical to set maximum processor state to less than 100% on battery, in my experience it's better to have the processor spend some time in the highest P-state and then return to idle as fast as possible, than to have it spend more time in some intermediate state.

For advanced tweaking, utilities like RMClock allow you to disable some P-states, as well as overclock and under- or overvolt your processor. While I personally haven't tried it, I've seen recommendations to only have two P-states enabled - the lowest possible multiplier (SuperLFM if supported) for idling, and the highest possible multiplier (at the lowest stable voltage) for everything else. Certainly something to consider playing around with if interested in such things. As long as you don't overclock or overvolt, the worst-case scenario is a BSOD and a restart.

1 For instance Intel Core 2 Duos, but not, I believe, newer Core i-series processors.
2 I'm using TMonitor to monitor the CPU clock speed and wPrime to push the processor to the maximum allowed speed.

To address the specific title question. I think the state that these settings refer to is also known as P-State.

Meaning, it's a control over the peak CPU frequency (and as the link explains, also the voltage used).

To my understanding, this is where you can see the currently set maximum CPU frequency of the system: 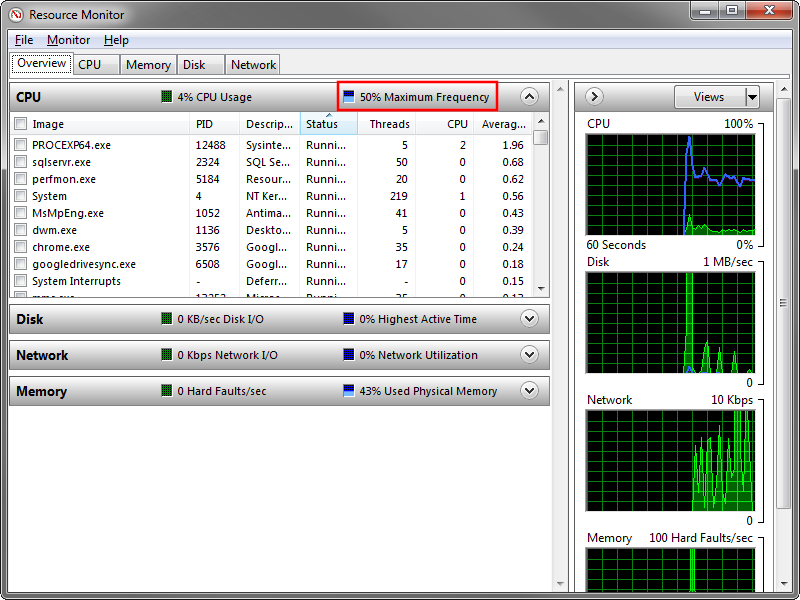 Windows 7 is able to vary the processor clock frequency according to the processor usage. Minimum and maximum processor state control the range within which Windows varies the clock speed.

For example, assume that your CPU is capable of 0 to 2.4 GHz, meaning that your maximum processor speed is 2.4 GHz. A minimum of 25% and a maximum of 75% will make Windows vary the speed between 600 MHz (25%) and 1.8 GHz (75%) out of the 2.4 GHz processor. "On battery" and "plugged in" is for setting two different ranges for the discharging and charging states.

The article How To Prevent Your Laptop From Overheating reports this :

We used Speccy to check for temperate during testing, based on which the processor running on 95% processor state gave the same performance (barely noticeable dip), with a drop of 10-20 C. You can keep an even lower processor state (such as 80-85%) to make sure that your laptop heats up even less.

Its simple. For minimum set about 5%, for maximum set 100%. You get all power you need, but when is CPU idle, it goes to lowest possible frequency. Dont worry about 5%,CPU newer can go so low. In my case (core2duo@3,2GHz) lower state is 2GHz even I set minimum to 5%.

Minimum and Maximum processor state is the percentage of CPU speed of which it will run at.

Lowering these would of course decrease performance under heavy workload. This is same kind of question like using a high speed CPU (3.00Ghz+) or a low speed CPU (~1.5Ghz) and number of cores matter.

For you are asking for Optimal settings then it would be:

And for the OverHeating topic, processor would not overheat (it will heat up tough) until you stress it, running heavy software like some heavy games can overheat it, it also depends on which processor and cooling system you are using, i would be able to help you more if you specify some more info

Actually it is a completely different topic.

If you want more info read these:

1) What is minimum and maximum processor state in power management?

3) What does the Minimum Processor State option in the Advanced options box of a Power Plan do?

EDIT: Each CPU has a number of Processor State, We can not set the CPU other than these CPU states. I took those values just for example.

Actually, all the people are answering from theory and books. I personally tried setting the maximum processor state at 30% and gain only 1 degree Celsius in overheat. I undervolted the processor to the minimum of getting a BSOD in 5 minutes of stress, and gained another 1 degree Celsius.

I stress the fact that the laptop, a Lenovo E540, is new, with cleaned exhaust channels, clean fan, new Thermal paste (best and most expensive on the market - about 25$ in a very tiny bottle). All this effort for only 2 degrees Celsius. This is because it's kind of a cheap laptop for Lenovo, not in the T or W series. The heatsink is very poor, and nothing on Earth can cope with that. The processor likes to stay at around 50-52C when idle, and 70-75C at load. These figures are with the above tweaks and without.

I think many users asking this question because searching proper settings to improve performance (mainly on older PCs or/and systems), I'm trying to add some 'skipped' (or side) info in a way that 'average' user can understood about system performance, and maybe they try to further research and make some experiment with.

(as simple can be described)

I'd like to mention (also) that "Minimum processor state" on "Power Options" also affects (eg.) "Shutdown/Sleep/Hibernation - on Idle time" scheduled task(s) *if they have been set.

^ In short: Windows sets by default some scheduled tasks to reduce power consumption on "idle" state. But, at the same time, there is an by default 'prediction not to fall into inactivity' eg. when tasks such as video playback or file downloads and so are performed, And additionally (lets say) "drives" the "cpu consuming" priorities where needed, so everything can be adjusted individually and automatically.

! This means that you should not change "Minimum processor state" (as affects many factors) but >Set the depended program/service or whatever, If needed, Instead.< !

*ie.: I think it's not wise to "frying" your cpu (if set to Minimum=100%) just because you need max performance (ex.) when you gaming, - but instead set to max only when you gaming and then revert to normal, but there's no need because windows successfully doing it automatically by default as when/if needed.

/!\ So, set it on your need but under 10%, only if you know exactly what you doing as you influence many factors by changing it. (I mentioned just some of them as for example) /!\

again: /!\ >Set the depended program/service or whatever, If needed, Instead.< /!\
ie.: In short and some kind of naively: (rough explain!)
Some procedures, or services, are not showed in "task manager" or there are 'into' the "svhost.exe", so, if you insists, check "Task Scheduler">Task Scheduler (Local)>Task Scheduler Library> for running schedules. You can set/mode individual tasks & sub-tasks (general, Triggers, Actions, Settings) from there, to correlate processes with and schedule to run under settable circumstances.

For "diggers": "Individual settings" can be done by several ways, as (custom)"scheduled task", even with cmd file or even with a 3rd party program or accompanied Graphic card's optimizing program, etc. (but it's another thread. and needs some study about. ...)

1
How do I lower processor usage to its bare minimum operating?
0
Advanced power options - processor power managment
11
What does the the "System cooling policy" under "Processor power management" on Windows 7 do?
5
Can the Asus Zenbooks be used safely with their lids closed?
0
Why am I getting a high CPU load > 70%, even when I tell Windows that it shouldn't be more than 20%?
0
Clock down Intel i7 3610QM
1
minimum allowable CPU speed
1
CPU performance monitoring and diagnosis Maximum Frequency drop
0
How to make Windows 8 tablets cooler? (lower temperature / less fan use)
0
How to decode Kernel-Power Event 566 when waking from sleep
See more linked questions

2
How can I make the CPU to switch from "minimum processor state" to "maximum processor state" much much faster?
0
Windows 7 power management -- vCore goes from 0.9V to ~1.30V
10
What is "Link State Power Management"?
132
What does the "Maximum Frequency" number mean in the Windows Resource Monitor?
4
Processor Maximum and Minimum state missing from Power Options
1
Power management in Solaris 11 using poweradm?
0
Maximum Proccessor state Damage hardware?
0
Windows 7: After wake from sleep, Maximum CPU P-State always sets to 5%
1
Power management settings in Windows 10 (and BIOS)