Why does Chrome on Windows 7 not show certain Unicode characters to me?

This Apple question contains the text

what is this key? ⎋

Which looks like this to me in Google Chrome:

Why is that Unicode character, or others like it, undisplayable in Google Chrome on Windows 7?

The browsers are encountering the problem of "The selected glyph is not in the specified font". There are two directions you can go from here: you can either pull the equivalent glyph out of another font (which will often look broken but it may not be clear why to the user) or just display a character-not-found placeholder (which will always look broken, but at least obviously so).

I imagine Firefox and Opera recognise that the glyph being requested is a symbol that is safe to pull from another font, while the remaining browsers are being conservative and just showing the "Uh... dunno" glyph.

Interesting. It's not just Chrome -- you might well ask why any of the following browsers can't display it on Windows 7: 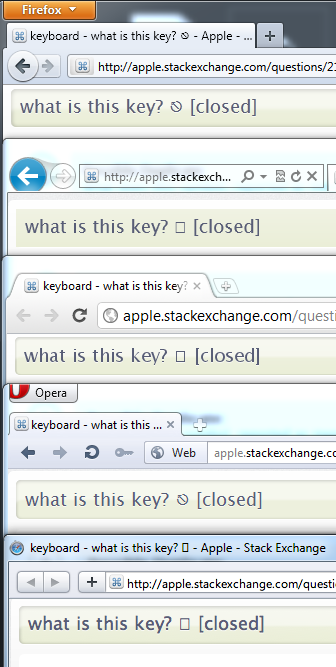 From top to bottom:

Therefore, Firefox and Opera can display this unicode character in Windows 7, but the other browsers cannot.

what is this key? ⎋

The question asking "Why is that Unicode character, [...] undisplayable in Google Chrome on Windows 7?" is the

That particular character is simply a unicode codepoint which is an arbitrary number. There are a lot of unicode codepoints that do not have an 'official' symbol. Even if they do have a symbol, it is not necessarily the case that your font has a symbol for that codepoint. If you choose a different font, you may end up with a different symbol.

I looked at the CSS for the page and it shows this character displaying in Arial (plus a bunch of other fonts that do not matter). Windows comes with Arial so it should always pick up that font first. It looks like Arial does not have a symbol for that unicode codepoint. Anytime you do not have a glyph for a codepoint, it puts in some form of a box indicating there is no glyph (as others have indicated).

The bigger question is, what exactly is Firefox or the other browsers doing where it works on Windows. I looked at the other fonts listed in the CSS (I thought it may be falling back on the next CSS font) but they also do not have a glyph for that codepoint. One possibility is that Firefox actually ships with its own fonts.

Digging into firefox, I did notice some fonts for math symbols here: 'C:\Program Files (x86)\Mozilla Firefox\res\fonts'. Perhaps this is where it is coming from.

I know this is a bit of an old question, but for those who are freshly Google'ing this, I have a solution that worked in 2013. First, you must confirm that you have a font installed in your Windows 7 PC that can render the font:

Assuming that at least one font in the Local Font List renders this:

If not, then install a couple of "catch all" Unicode fonts: Code2000 and Symbola

Once you have a font that'll render the symbol, you can try the browser test page:

Im running Chromium 13.0.782.112 on Archlinux and my default encoding is en_US.UTF-8 -- the charcter displays fine on the originally linked page.

The actual answer: It's because there's a bug in Chrome that borks Windows 7 (and higher?) unicode font rendering.

The issue is here, with all the gory details: https://crbug.com/42984 (star it and maybe somebody will notice it?)

More analysis and a possible workaround can be found here: http://gschoppe.com/uncategorized/fixing-unicode-support-in-google-chrome/ .

However after downloading Symbola font from here and then:

Firefox now shows the glyph in question, and also displays other glyphs.

Not the answer you're looking for? Browse other questions tagged windows-7 google-chrome or ask your own question.