Program to remember open Explorer folders in case of crash?

TL/DR: I want a power outage and crash proof way of remembering what folders explorer.exe had open. And I'm aware of and don't want to use gorram Total Commander and the like; stop recommending that, it doesn't solve my poroblem.

I'm running Windows 7 x64 and my Windows Explorer (Explorer.exe) crashes every now and then. The last time it happened, I dragged 2 shortcuts to movies into VLC.

Anyway, even though I ticked the folder option to store Explorer Windows in separate processes, hoping they would act like Chrome processes, they don't. For a year now, every time Explorer decides something went wrong in one folder, it closes everything and I lose my open folders.

This isn't a huge deal, but I hate having to remember what folders I was working with and have to go through a huge tree to find that one folder I had open and open it again.

So my question to you is, Do you know of any program, taskbar overlord, something, that will remember what folders you have open, so it can restore them in the event of an Explorer.exe crash or even a system crash&reset? For instance I'm using Desktop Restore by Jamie O'Connell to remember the icons positions on desktop. It's a handy tool which lies in the desktop Context Menu.

(I have ticked the "restore open folders on startup" obviously, but that only works when things don't crash :) )

I've also found RollBack Rx (also mentioned in this question) but I don't think I need to go as far as installing something like that to the master boot record. Though, it does sound like a handy tool. Has anyone used it before? How much space does it actually reserve? Because I don't have 1x my C:\ drive in free space available anywhere and I don't think it's worth it.

[EDIT] You were curious about why my explorer crashes. And I said it's never the same thing, and not that often. And here is an example:

My explorer just crashed when I right clicked on a usb stick in My Computer (hoping to eject it). The usb is fairly old, and I had hibernated and waked my computer in the middle of a transfer from it. Of course, the transfer was long over when I right clicked on the USB, so I don't think it's related to that. Anyway, one more crash I wish I had a backup for.

You can try Restart Explorer. It recovers previously opened windows in case of a crash, and can force restart explorer.exe (and recover those windows opened before the restart).

It has to be constantly running, but it can be set to start automatically at logon and uses very little CPU (0,05% on my machine at the very most) and RAM resources (4,5 mb ram at most on my machine).

I'll link the download link and mirrors (which may or may not work), it includes the .ahk source (it's made with autohotkey for personal use and it's a bit messy, as well as being translated from portuguese).

I was going to say the same and recommend xplorer². It's the same thing (single or dual-pane file manager) with a more Explorer-like interface than the GUI Commanders I have seen. 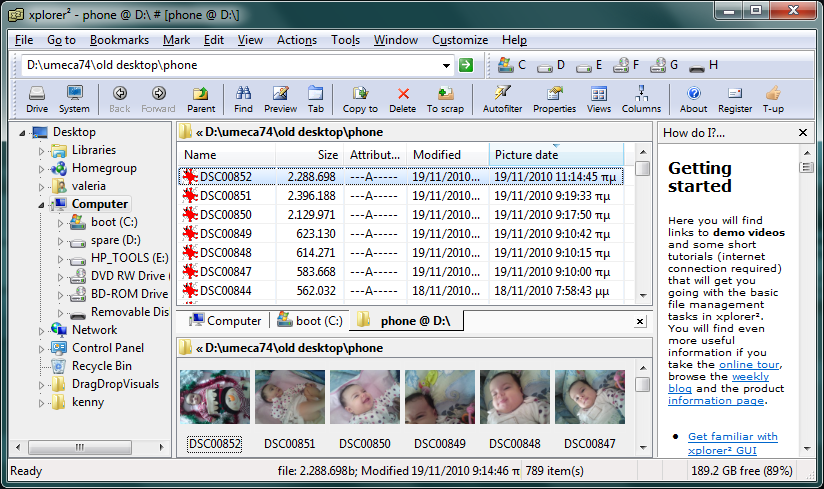 Not the answer you're looking for? Browse other questions tagged windows-explorer or ask your own question.