Is there a standard name for the "standard" computer screw?

I have the unfortunate task of writing a technical document, and I know the government is a stickler for unnecessary detail. Is there standard name for the standard computer screw? Also, what is the name of the standard disk drive screw?

Most screws in a computer are UTS 6-32 screws. 6-32 screws are used for your power supply, 3.5" hard drives, securing expansion cards, and the case panels.

The other common screw type is the metric M3-0.50 screw, which are used for mounting optical drives, floppy drives, and the motherboard.

To make it harder, there are also computer cases that ship with motherboard standoffs that accept imperial screws, not M3.

It's amusing that both imperial and metric screws are used in each computer, and rather annoying that these screws are fairly similar in size (although not in threading). This means that an M3 screw will fit in a 6-32 hole, and will even seem to screw in, but it won't stay in place well. A 6-32 screw will go in an M3 hole if you try hard enough, which results in stripping. 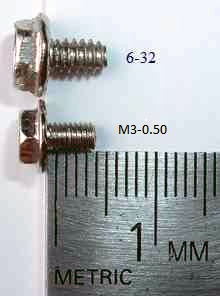 Here are the specs for most computer screws (Laptops are different)

Just Google "Computer Screw Set" and you will find kits that have everything you need.

Any special screws will come with the hardware you purchase.

One thing not mentioned here is about #4-40 and optical drives. I haven't looked into screw sizes for many years, but I ran into this fact many years ago, i'm not sure to what extent it apples nowadays. It may still apply.

Not the answer you're looking for? Browse other questions tagged standards screws or ask your own question.

5
HDD mounting screws size
1
What are the standard system unit case screw use?
1
What type of bolt is used to attach a sound card to an expansion plate?

0
Is there any STANDARD U.S.-compatible keyboard layout for typing extended Latin?
0
Can't screw PSU to computer case
2
How to disassemble this Samsung hard drive?
0
How do you remove stubborn screws from a laptop?
0
What are the standard Microsoft Office margins for double-sided printing on A4?
0
Open round screw in computer case
16
What kind of screwdriver can unscrew this?
0
The screw of the SSD that fastens it to the motherboard is broken and the MacBook Air (Mid 2012) does not recognize it
0
Is it ok to "over tighten" laptop heat sink screws? Is it ok for one screw being slightly less tight than the others?