How to have two headings at the same “level” in a multilevel list?

I found a good article (via Word's help) on how to set up numbered headings using multilevel lists. However, I can't find anything on how to set two different styles to the same level.

For example, suppose I have two styles for headings at the Heading 2 level; they're identical except that one is in a different colour, for situations where I want that particular section to stand out. But it's still at the level of Heading 2, so I'd want it to have the same formatting. Such as:

In the article linked above you can set each level of the multilevel list to a particular heading style, but there's no ability to select multiple styles.

Is there a way to do this?

I found my own answer: The trick is to have the new style "based" on an existing style that's already part of the numbering scheme.

Sorry, I mean no insult, but I am a little confused as to what you are asking as I seem to have done it easily.

It seems that, if you select a multilevel list, then select formatting, it will get rid of the multi level list. 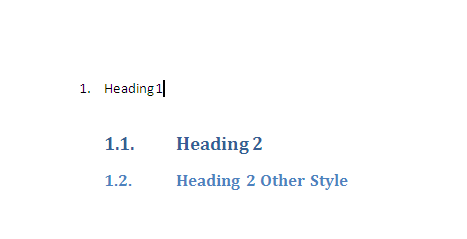 Alternatively, if you reselect multilevel list after choosing formatting, again, it will preserve the order of the list and the formatting.

If I have misunderstood, please let me know.

Word 2016 has me pulling my hair and wasting hours and hours. What I am trying: create two multi-level lists. I want to have both the same, just a different level style (similar to the asked question).

A nice guide is here: http://shaunakelly.com/word/numbering/numbering20072010.html

However, when I create my two lists with the level style assignment, switching the shared styles for the other headings get lost... For example:

Now, I added each list to my list gallery, but after defining List2 and modifying the numbering format and setting the styles to the levels, the other list looses the styles that are in common, e.g.,

When I toggle between the two from the Style gallery, the formatting changes the way I want, but modifying the MultiLevel List, is shows (No Style). This means I have to manually edit everything by hand, and we are talking hundreds of documents. Maybe someone has the secret?

But, the link above should allow you to do what you want, just after creating each MultiLevel List, right-click and add it to the Gallery.

You can create different style for the same heading.

If you change the color of a heading, Word automatically creates a version of the heading. You can view the same in the Styles gallery.

5
Get Custom style on Cross Reference's Reference Type
1
Is there any way to use Heading 1 in two different multilevel lists?
0
Can headings in word have different colored numbering at the same level?
1
level 2 headings with different styles
0
MS Word: How to supress list numbers from Table of Contents
0
How to make a style hyperlink-able?
0
How to have two different format of headings at the same “level” in a Table Of Content?