How do I sync Thunderbird across two computers?

I have a computer (laptop) at work that I have installed Thunderbird on and set all of these rules, created contacts, and updated calendars on. I don't want to have to go through all of that process over again on my desktop at home. Is there a tool/add-on or simple way to accomplish this?

You can set your thunderbird profile up on a (large) memory stick and then just take it with you. You'd probably want backups and some sort of encryption in case it gets lost, though.

The other idea would be a Dropbox folder, if you can install Dropbox on your work laptop. Since you got Thunderbird installed, I assume you're allowed to at least install software. The firewall may be another issue.

The only suggestions and utilities online deal with sneaker-net methods (portable drive profile above) and network drive methods (Dropbox or LAN/WAN).

I assume you're familiar with cloud storage systems such as Sugar, Dropbox, and the like. Most of them result in a particular folder or folders being copied from your computer to cloud storage "out there". Installing the host program allows you to keep files on multiple computers synchronized pretty effectively as well as backed up on the cloud.

You would set up Thunderbird to store it's profile data in a folder that Dropbox (or whichever app you choose) backs up and synchronizes.

Then you set up the Dropbox client on your work computer and download that same Thunderbird profile data to that computer.

Technically, using the portable version of Thunderbird, you could put the app itself in the cloud storage so it could be accessible wherever you download it.

All updates and changes would then be synced between any systems you have the the dropbox client and thunderbird app set up and configured properly.

Another solution, which I use for non-syncing apps,

would be symbolically linking (scriptable, cross-platform)

Using this method you cannot open it on both computers.

As for syncing mail, DO NOT BOTHER WITH THIS MANUALLY. Just switch to an IMAP mail server and THIS IS DONE FOR YOU. (Don't use POP)

As for Calendar, THIS IS DONE FOR YOU, just use Cal-DAV (Google Cal, or OwnCloud for self-hosted)

As for Contacts, THIS IS DONE FOR YOU, just use CardDAV (Owncloud)

I used to use a program called Synching Thunder and it worked very well. I don't know whether it still is working since it's no longer developed since 2007. If anyone has used it recently and can comment, that would be helpful.

Synching Thunder is designed as an application that synchronizes Mozilla Thunderbird mail between different mailboxes. A typical usage example would be keeping mail on a laptop in synch with mail on a desktop PC. 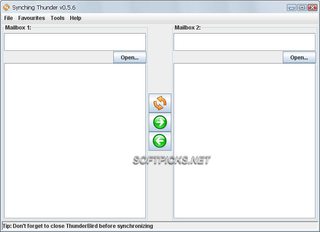 I set up Thunderbird on one machine, got it configured with 4 mail accounts, add-ons, message filters etc, then used a free tool called MozBackup to export the profile (it was quite large) and then import it into a new installation on another PC. It worked a treat. I use IMAP as well which is probably the best way to set up your mail if you want to look at it across multiple platforms (well, you could use MS Exchange & Outlook).

I'm new to Thunderbird and have installed the excellent Lightning calendar add-on so just trying to work out if I can get this to sync with a cloud based calendar so the different installations will treat the calendar as server-hosted and sync accordingly.

Not the answer you're looking for? Browse other questions tagged windows-7 sync thunderbird or ask your own question.

2
Thunderbird: Sync Virtual Folders
17
Is there a simple way to synchronize Thunderbird across machines?
5
Sync or export only Thunderbird account settings