How do you automatically detect a new network card in CentOS 6 / RedHat?

I'm using CentOS 6 in a virtual environment. When cloning a virtual version of CentOS, the old eth adapters are "removed" and replaced with new ones and net MAC addresses. However, the ifcfg-ethn files still exist. I am trying to figure out how to get CentOS to automatically rescan & recreate the network adapters / eth files, just like it did on install.

Otherwise I am left with the tedious process as described here: http://www.centos.org/docs/5/html/Installation_Guide-en-US/s1-s390info-addnetdevice.html

I know there is a quick way to do this in the GUI, but we are using a server so GUI does not apply in this case. Help?

Edit: @OldWolf suggested Kudzu, however Kudzu has been removed as of Centos 5 so I would rather avoid that. There is a procedure that Linux runs on initial install - can someone help me figure out what that is so I can manually trigger it?

With CentOS 6 everthing is handled by udev now. Go into /etc/udev/rules.d and delete the 70-persistent-net.rules file and reboot. If you open it berfore hand you will most likey see the original NIC MAC listed as eth0 and the new one as eth1.

Now you need to edit /etc/sysconfig/network-scripts/ifcfg-eth0 and manually update to the MAC of your new NIC card.

Deleting the file forces the detection process to run again at boot with no baggage left over from the cloning process, namely the old NIC MAC address(es).

I have to do it with my CentOS 6 clones on VMware ESXi 4.1 all the time. It's a pain kudzu would just handle it in the past with previous versions.

REMOVE the HWADDR line altogether (or change it to match your new NIC's MAC address).

You can use this tool also (This is not a GUI tool, its TUI tool, Text-based User Interface)

Type above command and press Enter 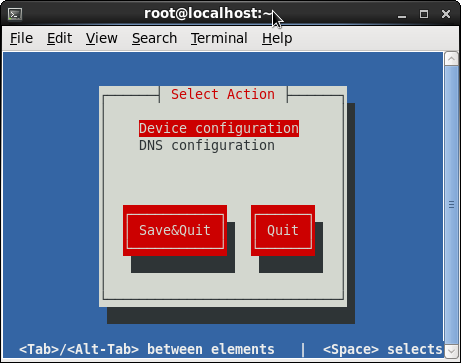 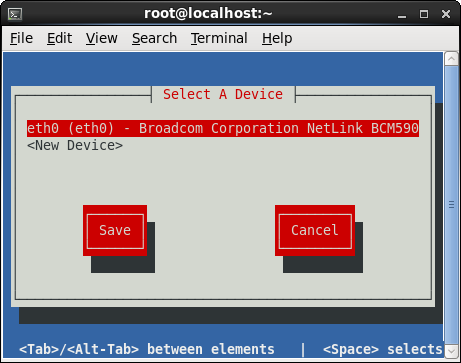 Modifying files after clone would not work for my use-case, thus I solved the problem as follows.

You need to edit two files, removing the references to the Mac addresses in each:

/etc/udev/rules.d/70-persistent-net.rules - remove from ATTR{address}== up to and including the next comma.

Now when you clone the VM and change the mac address networking will work as the Mac address never gets written to either file.

I create and delete so many CentOS 6 virtual machines I wrote some Bashfu to fix eth0 upon cloning in VirtualBox.

If your only problem is the mac address, you can run something similar to

To update the HWADDR entry.

Edit: Since it looks like the problem is an actual change in virtual hardware you can try the following. (untested and referenced from here )

edit /etc/sysconfig/hwconf and remove all reference to the previous NIC and rerun kudzu to see if it detects the new hardware. You may need to reboot.

I'm not using Vmware but KVM with virsh - this is what I've done.

Created a 'base' image with CentOS 6.4, this is the source of all my clones. After the first boot I created a script like this

Added it to init with

Deleted all the references into /etc/sysconfig/network-scripts/ifcfg-eth0 of HWADDR or UUID, also deleted the udev rules from /etc/udev/rules.d/70-persistent-net.rules.

At this point I shutdown the machine and started to clone. All works fine. The script I made is very simple but works fine, however it makes a few assumptions about your setup for network (eth0 only).

I hope will help.

I was dealing with multiple NICs and nothing above worked for me (VMware Fusion 7/VMware 6 and below), so I wrote a script. The tarball is here.

Here is the README that comes with it:

1
Drupal on CentOS / RedHat
0
Issues with Network interface card in CentOS 7
0
CentOS / RedHat DHCP working, static is not
0
Not detecting network card in centos 7
0
Centos network manager how to automatically start enp6s0
1
How do you set a static IP address in Centos 7