Is it possible to install Windows 8 using Microsoft Virtual PC?

I'm trying to install Windows 8 on my pc via Microsoft Virtual PC. However I get this annoying, non-descriptive error: 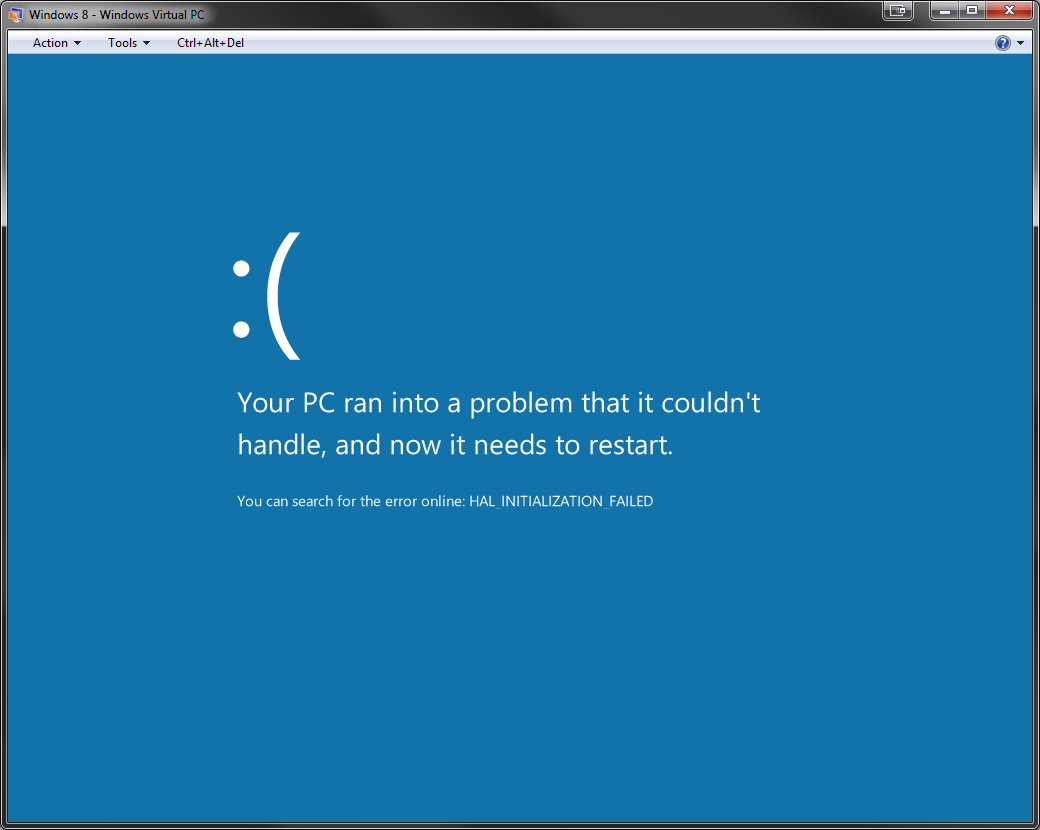 I'm looking to find out if Microsoft Virtual PC supports Windows 8, and if so how do I solve this issue?

NOTE: I'm NOT trying to ask for alternatives to Virtual PC, but rather trying to figure out if it's possible, and if so how, to use Virtual PC.

Steven Sinofsky, head of Windows, wrote a blog post titled Running Windows 8 Developer Preview in a virtual environment where he goes into the subject in detail. It's a good read. Halfway down he says:

"... our baseline assessment is as follows:

So no, Microsoft Virtual PC does not official support Windows 8. If an unofficial hack comes out and gets it running it will almost certainly be a sub-par experience.

The new official virtualization solution from Microsoft is Hyper-V and it will be available not only on the server but also on the desktop.

Windows 8 requires a new ACPI functionality mode (ACPI 2.0) which is not supported at all in many virtualisation products.

Thus far, I have only been able to get it working inside of VMWare Workstation 8 (which for some coincidence was launched today!).

If you want a free solution, I found a guide (located here) earlier today with instructions on how to get it working in Virtual Box.

I set it up in Virtual Box the latest version choosing Windows 7 64 bit as the "Version" under "VM Name and OS Type". It installed first try. I hope this helps.

You can not run Windows 8 in Virtual PC because it (Windows 8) does not support VPC. MSDN

You can use a Virtual HD.

It is reported to work using Virtual Box 4.1.0

Yes. You will be able to install a virtualized instance of Windows 8 (provided you have a working, valid copy), in virtual applications like VirtualBox (free) and VMware Workstation 8 (paid).

Also note that to virtualize Windows 8 Developer Preview you need hardware acceleration supported by your hardware.

You could solve this problem by turning off the virtual machine and changing the configuration:

After that, I applied the settings and virtual machine started normally.

Not the answer you're looking for? Browse other questions tagged windows-7 microsoft-virtual-pc windows-8 or ask your own question.