How to take screenshot of menu?

How do I take a screenshot when e.g. the wrench menu in Chrome is open?

Or perhaps the File menu in Firefox?

You have the option to capture the entire screen or the active window.

Install a tool for making screenshots, such as scrot, gnome-screenshot or ImageMagick, which provides import. Then run it with a delay from terminal, using one of these commands:

After running it, quickly open the menu and wait.

Both gnome-screenshot and scrot support taking a screenshot of the active window:

Note that overlapping menus won't be compensated for but rather cut off: 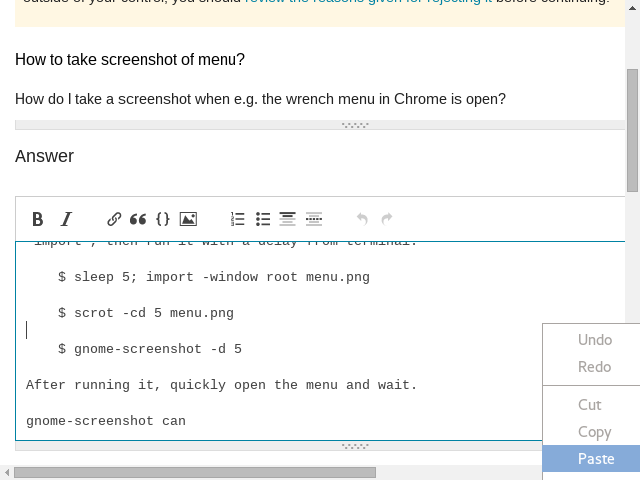 Then click "Print Screen" button (or the Fn+Print Screen) on the keyboard. Depending upon the version of linux open Tuxpaint (I assume using Debian), and paste the image.

This will actually save the entire screen. You may crop the extra areas now and save it in desired format.

This is one of the simplest ways that I use for snapshots...

Capturing menus in open applications is what Shutter screenshot tool is designed to do. Shutter can capture menus in their parent windows in any application, overlays, etc. as well as being able to capture everything that other screenshot tools can capture including entire screen, active window, selected area and webpage. Shutter is available in the repositories of most popular Linux distributions. In Debian-based distributions Shutter can be installed with this command:

4
Screenshot utility for linux
3
FileZilla menu not showing up in Ubuntu Lucid Lynx (10.04)
0
ImageMagick's “import” command line program failing to take a screenshot from CRON script
12
How I can take a screenshot with current cursor in GNOME?
1
GTK+ 3 Menu configuration for Emacs
1
Start a program, take automatic screenshot when its GUI has instantiated, then close program
0
how can i take screenshot of firefox with addon result
2
Taking vector screenshot from Firefox
1
How to take multiple screenshots in a row in Linux Mint
0
Creating a screenshot