Is it possible to regex replace from command line? Right now I'm using notepad++ to do this. In command line I can only use FINDSTR wich can only locate the mached files/lines

EDIT :
Maybe it will be possible to make a VB script and run it from cmd? I just created a file "hi.vbs" with the content

Then cmd allows me to run it directly by typing "hi" from command line.
So if it is not possible with batch script, then i may use a VB script trough batch. Or..?

go here
http://gnuwin32.sourceforge.net/packages.html
scroll down to SED. Download coreutils too while you're at it.

this command will replace a with b globally, and on each line. so not just the first occurrence on the line.

VBScript does support regular expressions, you can do find and replace with it.

I've written a free command line tool for Windows to do this. It's called rxrepl, it supports Unicode and file search. Some may find it a useful tool.

It has the following features: 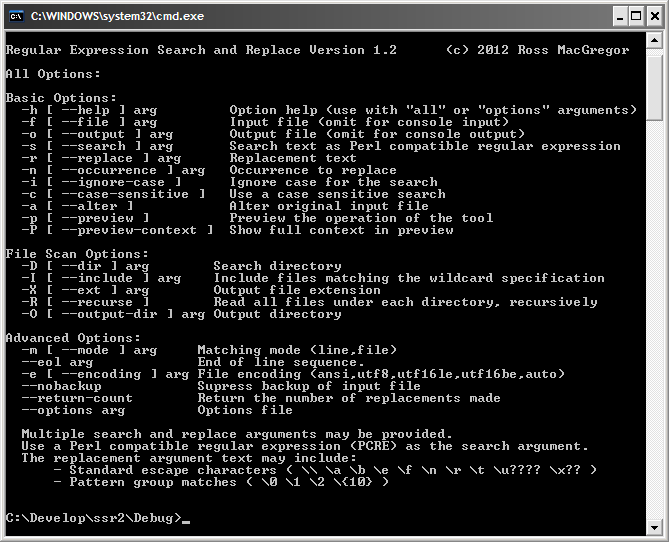 The Scripting Guy covers how to do this in PowerShell (no additional downloads on most recent Windows OSs, you probably already have it installed).

This supports .NET regular expressions, including positive and negative look-ahead, and all manner of things notepad++ did not support with regex before version 6.x (as much as I love notepad++).

I've found fnr.exe for that. It has GUI and command-line.

An open source tool to find and replace text in multiple files. 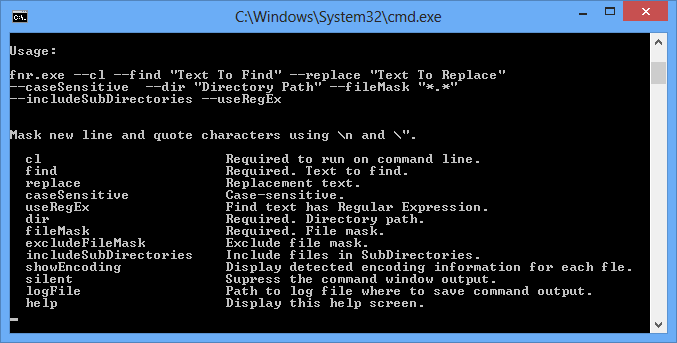 findstr allows to search for text (as specified with pattern in the file file-name. If file-name contains wildcards (* or ?), it searches in all files that match. The option /S searches in the current directory as well as in its subdirectories. If pattern contains spaces, it must be specified like so /C:"some text to be searched". In order to turn pattern into a regular expressions, the /R option must be used. The /I option searches case insensitive.

I'm a little late to the party, but JREPL.BAT is a hybrid JScript/batch script based regex utility that runs natively on any Windows machine from XP onward.

Full documentation is built into the script, which can be accessed via JREPL /?, or use JREPL /?? for paged output.

JREPL uses standard ECMA regex that comes with JScript. ECMA regex is not quite as powerful as the .NET regex available to powershell, but it is still pretty darn good. And I think the average user will find this utility easier to use than powershell.

I developed the script because my workplace does not allow downloading of non-standard exe files, but has no restriction on writing batch or JScript scripts :-)

Simply follow the link and copy the script code into a file named JREPL.BAT. Read the subsequent posts from that thread for examples of usage and development history. There are also many StackOverflow answers that use JREPL.BAT.

Two good choices are either Cygwin which will give you a Unix-like, bash-like environment (alternative to cmd.exe); and Unxutils, Win32 ports of a collection of individual Unix utilities. In either package, see 'sed', 'awk', and 'grep'.

You can also use GSAR to perform command line search and replace. Works with hex and binary as well. It will not do the complex heavy lifting that regex can perform, but for basic search and replace, it does the job quickly and easily.

Not the answer you're looking for? Browse other questions tagged windows command-line regex find-and-replace or ask your own question.

9
Perl for matching with regular expressions in Terminal?
1
Script to Find Certain words and delete those lines in a file
0
How do I parse text from one document, and insert into another at a specific position?

2
How to “reuse” a regex find and replace in Vim
1
How To Search & Replace From a Word to another in The Same Line?
0
How to run regex find and replace using windows command line
0
Multiple line Find & replace - Notepad++ , regex, copy a text from a particular line and replace in another line
2
Using regex in the “replace” part of a search/replace?
0
RegEx. Is it possible to create search patterns that set different groups in different lines?
0
NOTEPAD++ , REPLACE domain\username in to dummydomain007\xxxxxxx